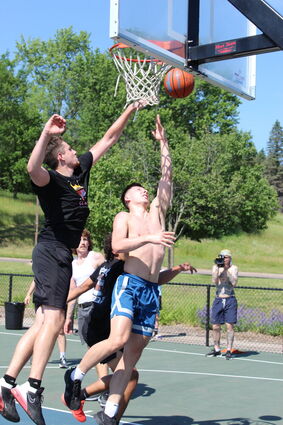 Conner Barney of FDL Boyz shoots while the Milkmen's Noah Paulson tries to block the shot during Saturday's 3-on-3 Pinehurst Park championship game.

The basketball courts at Pinehurst Park were buzzing with basketball Saturday afternoon, as the annual 3-on-3 tournament commenced five days later than anticipated.

Delayed by stormy cold weather on July Fourth, Saturday was sunny and warm. With two half-court games happening simultaneously - each one with a referee - the courts were constantly busy. Meanwhile, the fences were draped with players, coaches and supporters watching and/or waiting their turn.

"We couldn't have asked for better weather, and we had such a big crowd here watching. I love the way it looks with all the banners and a bunch of people sitting in the chairs and grass around the court," said tournament organizer Paul Cameron, a Cloquet grad who now lives in Duluth. As usual, Cameron was assisted by longtime friends Jackson Nemmers filming and Travis Evers officiating the tournament, with Cameron both running and playing in it.

Fourteen teams played Saturday, after a few dropped out because of the rescheduling, with most players out of high school, but at least one team of sixth-graders.

"It was still an awesome turnout and super-competitive," Cameron said. "We had the first-year winners out here to play, and the second-year winners. 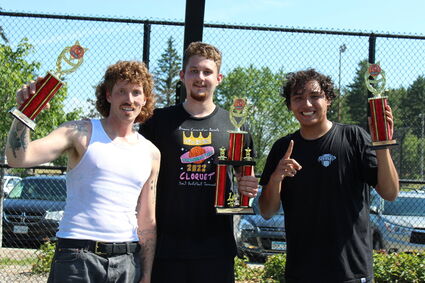 Trophy winners Saturday included Paul Cameron, left, for "most drip," and Zaa Buffalo, right, for tournament MVP. Noah Paulson, center, holds the championship team trophy as all three were on the winning team, the Milkmen. "Most drip" is slang for "best swag" or "best style."

In fact, Cameron's team beat last year's champions, the FDL Boyz, in the final game, an intense 10 minutes of action-packed basketball. Cameron's team was the Milkmen "because we deliver," said Zaa Buffalo, who won the MVP trophy and played with Cameron and Noah Paulson on the three-player team. "The FDL Boyz went undefeated and we lost our first game, so we had to climb back," Cameron said.

It was a tight game, with a final score of 10-7. Cameron said teams get one or two points per shot to win and they play 10-minute games unless a team gets to 21 points faster than that.

Cameron said Cloquet really has something special with Pinehurst Park.

There is no charge to play in the tournament, which is mostly organized over Instagram. This year Cameron also gave away T-shirts to all the players. He said he'd love to get a sponsor for the tournament next year, and maybe a food truck with cold drinks and snacks to set up.