On the Mark: Wrong Days has it all: music, sport and politics 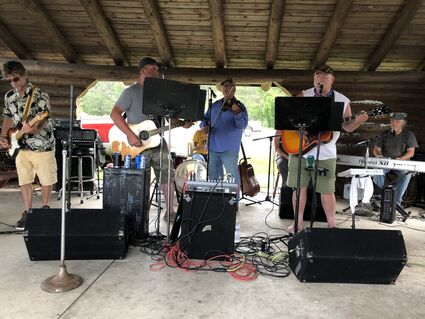 The River Hill Rangers perform during this year's Wrong Days in Wright festivities.

It's impossible to take in every pleasure and message at a community festival. Wrong Days in Wright last weekend was as joyful as ever. Arriving early, I watched some energetic softball as I walked the grounds. And later, a vigorous match of volleyball. I enjoyed the parade and my tacos from the food truck.

Highlights of the day for me included learning more about the Talon Metals Corporation's proposed plans to build an underground mine in Tamarack that would operate for nine years and primarily extract nickel, but also some copper, cobalt, platinum group metals and iron. I had read with interest Walker Orenstein's January 2022 MinnPost article on the company's plans and his reporting that environmental and Native American groups are skeptical and, in some cases, outright opposed to the mine. I was delighted to find a booth set up by the Tamarack Water Alliance (tamarackwateralliance.org) with good information on the still-speculative project including - if developed - what the consequences will be for our water and surrounding communities.

The parade is always a highlight, even if you don't enjoy being peppered with tiny candies hurled out of vehicles. I was glad to see our candidates for political office engaged: I enjoyed waving to Kelly Lake later in the morning and cheered for John Peura, Democratic candidate for the Minnesota State Senate, on foot and shaking hands energetically.

My favorite Wrong Days performance every year is listening to the River Hill Rangers deliver beautiful - and sometimes sad - music. This year, the musicians numbered eight and included a woman drummer, Digger DeRusha on the keyboard, several guitars, a fiddle and lots of great song lyrics. People drew up their lawn chairs on all sides of the open-air pavilion to take in the energetic music, song and humor.