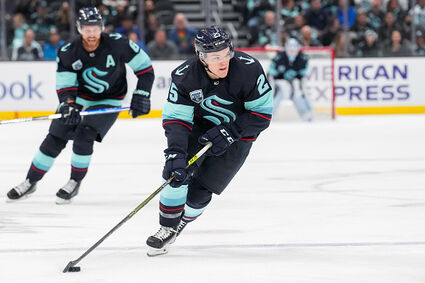 Former CEC Lumberjacks and UMD Bulldogs hockey star Karson Kuhlman signed a contract with the Seattle Kraken recently after being claimed off waivers by the Kraken last season. Kuhlman had previously played for the Boston Bruins for parts of four seasons.

Last January former Cloquet-Esko-Carlton and UMD hockey player Karson Kuhlman was claimed off waivers by the Seattle Kraken of the NHL. Kuhlman, who played parts of four seasons with the Boston Bruins, signed a one-year deal last week to stay in Seattle with a chance to see significant playing time this season. According to the Kraken website, the deal was worth $825,000.

"It was a good change of scenery and gives me an opportunity to become a more-regular player in Seattle," said Kuhlman. "Everywhere you go in this league there are great players, but I am excited about playing here."

The move to Seattle was a bit of a culture shock for Esko's Kuhlman, a former captain and national champion on the UMD Bulldogs team.

The word "pace" describes exactly what Kuhlman is focusing on in his off-season workouts.

"Seattle wants to see me play hard and fast and make plays with an up-tempo style," said Kuhlman. "We have a lot of guys who are playing pro hockey up here in northern Minnesota and we all work out together."

Kuhlman has spent about four days a week on average in the gym as well as getting back onto the ice in July to begin the ramp-up process before training camp.

"The first phase of training is to really let your body get back to normal after a long season," said Kuhlman. "As the summer progresses we work on general conditioning and strength training for mainly lower body and do speed workouts."

After appearing in 25 games last season with the Kraken and also coming off the World Hockey Championships while playing for Team USA, Kuhlman was awarded a new contract by Seattle.

Kuhlman's value to the Kraken is not just on the offensive side, but as an overall player who is a penalty-killing machine. The ability to forecheck and have defensive end awareness is something that Kuhlman has proven throughout his career and especially last season with Seattle. It is that type of hard work ethic that Kuhlman hopes will keep him in the lineup night in and night out.

"There is a lot of pressure because there are new and younger guys coming into the league every year, so you can't let up off the gas pedal," said Kuhlman. "Once you get a taste of playing in the NHL, it makes you even hungrier. As long as you stay hungry you have a shot; once you quit putting the work in, it won't take long and you'll be out of the league."

According to a Kraken news release, Kuhlman split the 2021-22 season between the Boston Bruins and Seattle Kraken, playing in 19 games for the Bruins before being claimed off of waivers by the Kraken on Jan. 17, 2022. He totaled 10 points (three goals, seven assists) in 44 games during the 2021-22 campaign, eight of those points (two goals, six assists) coming in his 25 games with Seattle. The 5-foot-10 190-pound forward set career highs in assists and points and games played last season, and matched his career best with three goals. Kuhlman finished the year with a 54.6 Corsi rating, the highest among Kraken skaters who played in at least 20 games.

The Kraken will open camp right around Sept. 15 under head coach Dave Hakstol.

"Camp is hard work and it is tough," Kuhlman said. "From the first whistle of camp, you have to be ready."

Kuhlman was happy with how the contract signing played out and he is happy to be back in Seattle.

"I was a restricted free agent, so if they decided to sign me they want me back, and I am glad to be playing there," Kuhlman said.