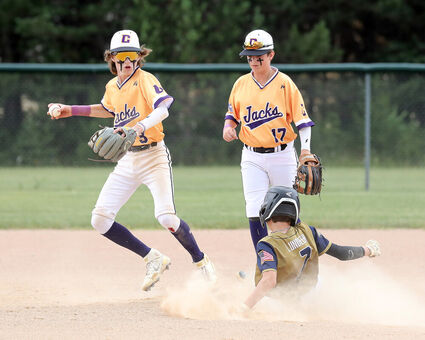 Jackson Peterson gets an out on a Hermantown player while next to teammate Mason Robbins during a Cloquet 13U baseball game during Sunday's Northland Classic at Braun Park.

"It was a great tournament," said tournament director Nate Knutson. "We had rain on Thursday night prior to the tournament, which made the fields a little soft on Friday morning, but by the time we started playing games, everything was in great shape and the weather held all weekend for us."

Games were played in the U9, U10, U11, U12, U13 and U14 divisions. All of the championship games were played at Braun Park with the exception of the U14 Division, which was played at Mettner Field. Carlton's Chub Lake Park also hosted games over the weekend.

"It was a great atmosphere at all locations," said Knutson. "We had concessions going on, so there was food at all the fields, and it was just a great time for everyone."

Saturday night Knutson hosted a booth for all the Cloquet teams at Mettner Field as the Cloquet U14 team played a game under the lights.

"Sammy's Pizza sponsored a pizza night for us and we had all the kids from the other Cloquet teams watching," Knutson said. 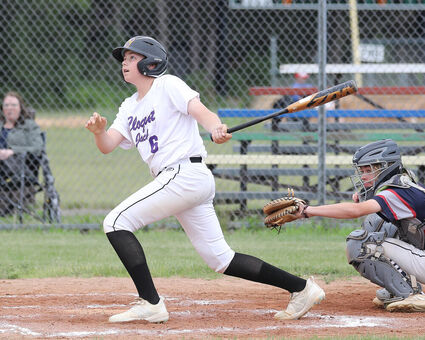 Connor Sullivan watches his hit during the Cloquet 14U baseball team's game Saturday during the Northland Classic at Braun Park.

"Our Cloquet teams did pretty well with a first-place finish, a runner-up and two third-place finishes," Knutson said.

"We also used local players to keep our fields playable, run the concessions and to clean up garbage and run the scoreboards," said Knutson. "It was a great weekend and we love offering the chance for the teams to get some more games in."