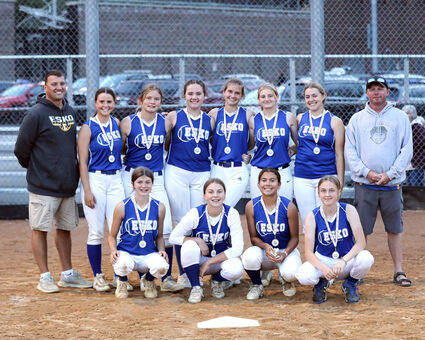 The Esko softball team took the long way to the championship game, coming out of the losers bracket before falling to Carlton/Wrenshall in the finals for a second-place finish.

The Carlton/Wrenshall Raptors took top honors in last week's Arrowhead Softball League playoffs with an impressive 10-1 win over Esko in the U16/U18 division.

"It was a fun summer season of softball for our girls," said Raptors coach Brent Pokornowski. "We had a nice playoff run and it was good for the girls to end with a big win."

Pokornowski is one of three head coaches for the Raptors, alongside Anna George and Hannah Mitchell.

The Raptors went 3-0 in their playoff run, including wins over Duluth East by 12-0, the West Duluth Waves by 11-1 and the championship win over Esko.

To reach the championship, Esko had a long road by coming out of the losers bracket before falling to Carlton/Wrenshall in the finals.

"We went 5-2 in the playoffs and I was a bit shocked because our team is so young," said longtime Esko softball coach Jeff "Huff" Emanuel. "Nearly my entire team was U14 eligible, but we moved them up to play stronger competition and they held their own pretty well all summer."

Abby Mitchell led the Raptors by throwing a one-hitter and striking out 10 Esko batters. She also was 2 for 2 at the plate with a pair of RBIs. Eliza DeCaigney also had two hits with four RBIs and Carly Lawry added two hits and two RBIs as well.

The Raptors sported a lineup that featured players from both Wrenshall and Carlton as well as one college player, Brooke Kent, who was age-eligible to play this summer.

"It was so much fun having Brooke back to play for her high school coach, Anna George," said Pokornowski. "Brooke made us a much stronger team and she was a great teammate to the younger players."

Both teams used the summer to take advantage of warmer weather and get innings for pitchers, fielders and hitters. 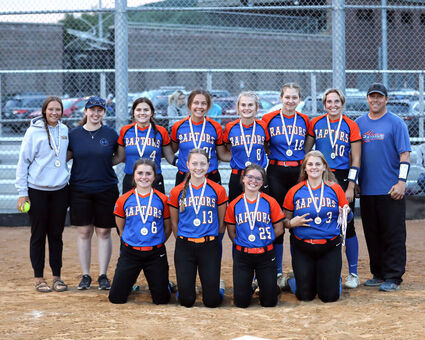 The Carlton/Wrenshall Raptors won the Arrowhead Softball League playoffs, going 3-0 in their playoff run, ending with a championship win over Esko.

"About 75 percent of my team are eighth-graders going into ninth grade, so getting them over 20 games of at bats and pitching is big for them," Emanuel said. "Playing seven games in the playoffs against what are pretty much varsity softball teams was huge for this group, and they will benefit next spring."

Kaelyn Foxx pitched most of the games this summer for Esko and the team had plenty of players who improved dramatically at the plate.

Clara Swanson was Esko's top-average hitter as well as clutch hitter this summer while Rilee Durovec, Foxx and Cairin Berger were among the hitting leaders for the team.

"I think for all summer teams the idea is to get the repetitions in and to be playing your best softball when the season ends," Pokornowski saud. "For our team and group of girls, they had a great summer and now had a little success, so it will be fun to just pick up where we left off next spring."