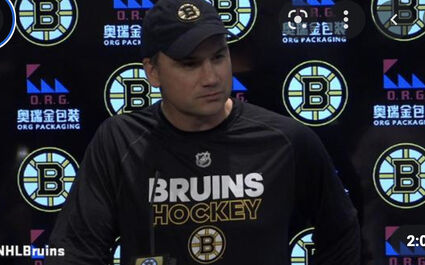 The hockey journey of former Lumberjack Jamie Langenbrunner continued this past week when it was announced he is the new assistant general manager of the Boston Bruins.

"It was just a natural progression to move into the assistant GM position," Langenbrunner said. "After our GM for our AHL affiliate in Providence left last year, I had the chance to be involved with running that team and that opened things up in Boston. Don Sweeney, our GM for the Bruins, gave me the chance and it is a great opportunity for me."

Ironically, after his playing career ended Langenbrunner was unsure he wanted to continue being involved with hockey. That all changed while on a vacation with his wife and some current and fellow former players.

"We were on vacation with Jay Pandolfo and his wife, and Zach Parise and his wife," Langenbrunner said. "Jay was working with the Bruins and asked if I wanted to get involved in Boston, so I said I'd give it a shot and see how it went."

A big key to Langenbrunner getting involved in the management side as opposed to coaching was the flexibility management offers.

"When you are a coach, there is no time away once the season starts," Langenbrunner said. "I have been able to watch my kids play and have a bit more flexibility than I would have had as a coach."

As the assistant GM, Langenbrunner will be involved in player personnel decisions. He will also spend the bulk of his time watching pro hockey games, European players, and college players.

"I will be able to pass along information on possible players we are looking to trade for, draft or pick up in free agency," Langenbrunner said. "You have to know what you have for players in the minors and what other teams have in their systems. There is a lot of work to put in, so when potential trades happen you have as much information as possible. You are always looking at the big picture."

One thing Langenbrunner has learned is how difficult making that blockbuster-type trade can be.

Langenbrunner will also be another voice on draft day.

Back in 2020, he faced an unusual situation when the Bruins decided they were interested in possibly drafting his youngest son, Mason. Eventually the Bruins drafted Mason at 151st overall in the fifth round of the 2020 NHL draft. (Mason will play hockey at Harvard University starting this year.)

"That was interesting," said Langenbrunner. "They came to me and said, 'What would you think if we drafted Mason?' I told them I had no comment one way or another and I wasn't going to be offended either way. I know there were other teams that would have taken Mason, but I felt it was best to let others make that decision."

Another key to Langenbrunner's success at the upper management level has been his ability to relate to players. As someone who played 18 years, he has been through much of what players are dealing with at the professional level.

"I think it gives you a level of street credibility," he said. "Guys know that they can ask questions, or just vent because I've been in their same situation."

Last season the Bruins made the playoffs again - only to lose in Game 7 in their opening round matchup against Carolina.

"There are times when things can get a bit stressful," said Langenbrunner. "Those Game 7 losses are always tough, but our goal is to be in the playoffs every year and give our team a chance and we've been pretty successful so far in doing that. Chasing championships, and making the playoffs, are what we strive for."

If Langenbrunner continues to progress through the organization, who knows - maybe the next championship team will include his son Mason. That would be a fitting piece to the hockey puzzle for Langenbrunner.

Langenbrunner is not the only former Cloquet player who has achieved success after their playing careers ended. Derek Plante recently was named the assistant coach of the Chicago Blackhawks after spending the past few years at UMD as an assistant to Scott Sandelin.

Corey Millen also achieved coaching success after his playing days. Millen was the head coach of the Minnesota Wilderness when they won the Robertson Cup in 2015 and is the current head coach of the St. Cloud Norseman of the NAHL. He also was a graduate assistant at the University of Minnesota, and assisted at the U.S. Air Force Academy for one season.