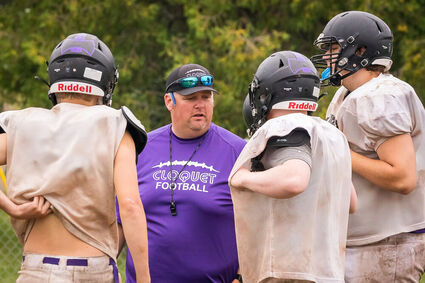 Cloquet head football coach Jeff Ojanen isn't new to the program, but he is new to the head coach position. He said the philosophy and his style won't change much.

In Cloquet, longtime assistant coach Jeff Ojanen takes the reins upon Tom Lenarz's retiring. Lenarz spent 27 years coaching in the Cloquet program, including the last 19 as head coach. Ojanen was an assistant under Lenarz for all 19 of those years.

"Coach Lenarz and I went through a lot together," Ojanen said. "We had a lot of highs and a lot of lows, but I learned a lot from him."

During his tenure Lenarz established a solid foundation through the years and that is something that Ojanen would like to continue.

"Cloquet football will still look the same with maybe a few different wrinkles," Ojanen said. "Overall, our philosophy will be the same."

Ojanen is prepared for issues he has not faced before.

For years, Ojanen was the defensive coordinator for the 'Jacks, but this season he will relinquish those duties to Lance Horvat while Ojanen hones in on coaching the entire team.

"I will definitely be still involved with the defense, but I will give up the play calling on Friday nights," said Ojanen. "I will be our special teams coordinator on game night and all our coaches will have their duties, but I will have to concentrate more on running the overall game."

During their 19-year run, Ojanen was the more emotional coach on the sidelines and he isn't planning on changing as he steps into the top role.

"I am an emotional guy and I wear my emotions on my sleeve," Ojanen said. "That won't change, but I'll try and pick my spots and I am excited for the opportunity. Tom established Cloquet as a regional power and we have a good group of kids who should be good, and I think can compete for a sectional title."

"I saw an ad for the position and I took a shot at it," said Pokornowski. "I wasn't sure where the program was at and, after checking things out, I knew they only had eight kids left at the end of last season."

When Carlton and Wrenshall first paired up in football, the team employed longtime Wren's coach Jeremy Zywicki alongside Jason Crain, who was in his second year as a head coach. After the first year of a co-program, Crain left and Zywicki was the head coach. Zywicki spent 11 years at Wrenshall - the final three seasons for the combination Carlton/Wrenshall team. Zywicki has left the Wrenshall school district and moved on to a position in Esko.

The first issue Pokornowski faced was the decision that had already been made to run this year as only a junior varsity program.

"I had to go out and start recruiting players," Pokornowski said. "At the end of July we had 20 kids for the team. We had the kids march in both the Wrenshall and Carlton parades and we handed out flyers. By Aug. 15, we had 27 kids." 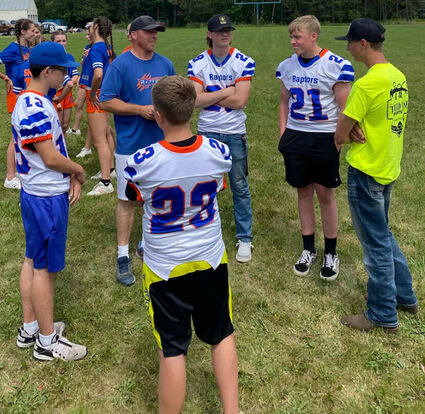 Brent Pokornowski, the new head football coach for the Carlton/Wrenshall cooperative football team, stands with players before the Brickyard Days parade. The Raptors will play a junior varsity season, but may play varsity games as a substitute team thanks to recruiting efforts that saw their numbers grow substantially over the summer.

Despite the large number of athletes, the Raptors will still play a junior varsity schedule with a slight chance of acting as a fill-in varsity team for other teams that may need to find a team to play at a moment's notice.

Pokornowski quarterbacked back-to-back 10-0 regular seasons in high school at Dassel-Cokato and then spent two years playing at Mesabi Community College. He then went on to the University of Minnesota Crookston on a scholarship and played as a defensive back. Pokornowski also had three sons who played high school football in Cloquet and a daughter who is on his Raptors softball team.

He also is a high school football official, and coached a season at Fond du Lac Tribal and Community College under Tony Deleon, as the special teams and running backs coach.

"We have just a couple of expectations for the team," said Pokornowski. "The first is to finish the season healthy and safe. The second is to do things as professionally as we can and to rebuild this program. If we do those things, everything else will take care of itself."