Politics to star on Labor Day 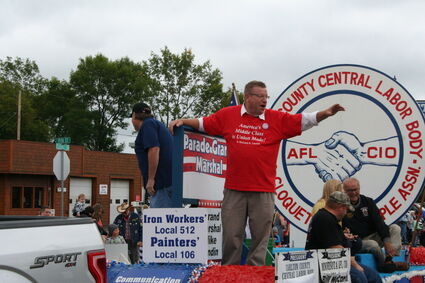 With only a few days left until Labor Day, Central Labor Body president Chad Tuura is bouncing between excitement over what he’s predicting will be a large parade and worry, because this important local event basically rests on his shoulders.

He was giddy Tuesday night, after learning that Minnesota Secretary of State Steve Simon had agreed to be grand marshal in Monday’s parade, and after hearing from the Democratic-Farmer-Labor party that Cloquet would likely see some “major politicians” here for the parade, which starts at 11 a.m. Monday and runs down Cloquet Avenue from 18th to Eighth streets.

“They won’t tell me who or when, but there’s a good chance that some well-known politicians will be attending,” he said.

Expect lots of flag waving from both major parties and — at the other end of the parade spectrum — a beach party theme from The Jack bar. The downtown Cloquet bar is well-known for its fun choreographed dances every Labor Day parade.

“I’m not sure it’s actual dancing, but it’s good for a laugh,” said bar owner (and lead dancer) Adam Bailey.

Bailey said they’re hoping to get the public into the beach party theme and picked a song that “hopefully can generate a little more crowd participation.”

Anyone who would like to get in on the fun and enter or volunteer to help with the parade is asked to call Tuura in advance at 218-590-0238.

After the parade, community members and parade-goers are invited to wander down to Veterans Park, where there will be free bouncy houses for the kids, courtesy of the Central Labor Body, along with food trucks and perhaps some other vendors.

In addition, the Labor Day car show runs 10 a.m. to 3 p.m. at the Northeastern Hotel, Saloon and Grille on Dunlap Island. Admission is free, and there will be burgers and brats available for purchase, along with a full bar inside.

The festivities actually begin the day before with the Oldtimers Banquet, a free event at the Carlton Four Seasons Event Center and Sports Complex 12-4 p.m., Sunday, Sept. 4. The main purpose of the banquet is to honor the retirees of the Carlton County labor force, state Rep. Mike Sundin told the Pine Knot, adding that the teachers, millworkers, and other union workers who worked to create equal opportunities for all laborers should be celebrated.

Tuura — in his second year of leading the Labor Day preparations — said it’s not getting any easier, just bigger. There are almost no volunteers yet for Labor Day itself, although a youth group and at least one Eagles Club member have promised to help with the banquet Sunday.

“It would be nice if some people came forward, especially if some of the retirees would share their knowledge,” he said. “If anyone has time and wants to help out, that would be awesome.”

Still, he’s determined to do his best. It’s an important holiday, after all.

“It’s Labor Day,” he said. “Our forefathers fought for this day.”

Indeed they did. Not on the battlefields of Europe, but rather on the streets of America, inside its factories, its courtrooms and its statehouses. Created by the labor movement in the late 19th century, Labor Day became a federal holiday in 1894. Less than 20 years later, Cloquet — a hotbed of Finnish co-ops and growing unions — began celebrating Labor Day. It’s now touted as one of the longest continually running Labor Day celebrations in the country.

In fact, the Cloquet Labor Day celebration has been running even longer than modern organizers realized, Pine Knot News reporter Mike Creger discovered when the event was marking its 100th anniversary in 2019.

The real story is that in 1917, two unions from Cloquet’s lumber plants decided to organize “Cloquet’s first observance of Labor Day,” Creger reported the week before the 2019 holiday. “The Pulp and Sulphite Workers and the International Brotherhood of Papermakers would cooperate in the organizing and then take each other on in a baseball game as part of the fun. The Papermakers won, earning a cool $10.”

That wasn’t all they did. It was a party for the whole city.

The Cloquet unions had to ask storeowners to shut down that Monday so workers could get out and enjoy the day. The paper mills did not start up for the week until midnight after the holiday. Like the other cities before them, the millworkers were trying to impress upon the public the value of unionized labor. They were also celebrating new unions forming in the city among carpenters, retail clerks and box factory employees. It’s likely that soon after Labor Day, a loose association of the unions was formed.

A parade of a reported 200 workers, dressed all in white, marched in the heart of town in a morning parade that Sept. 3. It led to Pinehurst Park for speakers, food, music and a bonanza of sporting activities typical for the time: a “fat-man” race, married and single persons’ sack and running races, wrestling, boxing, tug-of-war, shot putt, leapfrog, bicycle races, married woman’s egg race and an undefined “young married women’s clothespin contest.” A dance wrapped up the evening with music from the five-piece Gerin’s orchestra.

Local businesses helped with prizes and cash donations, including $100 from Northwest Paper Company. (That’s about $2,000 in today’s money.) The prizes donated by merchants and handed out that day are a hoot: dress shoes, boxes of cigars, fountain pens, watch fobs, hats, rings, dress shirts, dining forks and knives, fall sweaters, packs of gum, a Brownie camera, an oak rocking chair, electric iron, and a sack of sugar.

Doing the math reveals that 2022 will mark the 105th anniversary of the first Labor Day celebration in Cloquet.