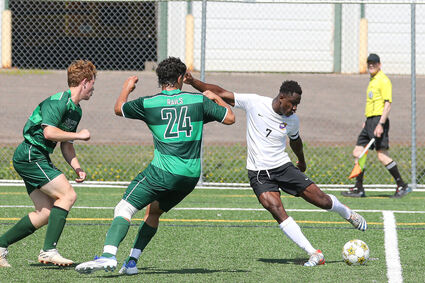 The Cloquet-Esko-Carlton boys soccer team opened play last week with an impressive win followed by a pair of tough losses to a pair of highly ranked metro teams.

The Lumberjacks opened play Thursday with a resounding 9-0 win on the road over Proctor.

"We were ready right from the start," said CEC coach John Sundquist. "Last year there were times where we came out slow, but Thursday the guys were ready."

After graduating seven players from last year's team that went 12-4-1, Sundquist is anxious to learn how his younger players will react when the bright lights shine on the field.

"Against Proctor the guys handled everything well," Sundquist said.

A pleasant surprise was the 'Jacks getting three goals from sophomore forward Hudson Snesrud.

"He's a hockey player so he knows how to get in position around the net and the ball finds him," Sundquist said. "He just knows where to be."

Snesrud wasn't the only one with a hot foot. Senior Jordan Aultman and sophomore Rizal Agaton-Howes also scored two goals each. Elijah Aultman and Anders Gunelson were the other CEC goal scorers.

Goalie Lucas Rauner made five saves to pick up the shutout in the nets.

On Saturday the Lumberjacks hosted the Columbia Heights Hylanders in a game that saw CEC drop a 1-0 decision.

"That was a frustrating game because we had so many chances and couldn't get the ball in the net," said Sundquist. "They only had four shots on goal and one of them just happened to go in."

CEC outshot the Hylanders 14-4 and controlled the pace of the game.

"I felt the game was in our hands," said Sundquist. "We had one defensive lapse and they capitalized on it. They are a real high-quality club and it is good for us to play those kinds of teams."

As good as the Hylanders were, the 'Jacks headed to the Twin Cities Monday to play an even better team: the Mounds View Mustangs, who are coming off the Class AAA state championship last year. CEC played an amazing game against the Mustangs, but ended up falling 1-0 in overtime. 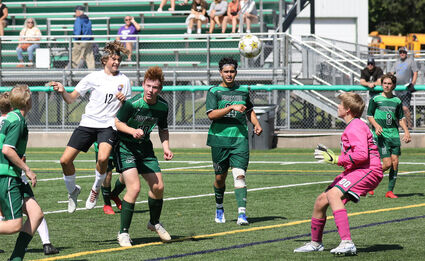 "We played well and took them to overtime," said Sundquist. "They had the advantage in territorial play, but we had our chances."

Despite the two losses against some metro power schools, Sundquist and his team are excited about the upcoming season.

"I am really proud of the boys and the effort they have given so far," said Sundquist before boarding the bus home Monday. "It was a fun game, it was exciting and the boys were upset and mad that they had a chance and didn't win. I think the best thing is the guys know we can be aggressive and they gained a lot of confidence."

The Lumberjacks had two away games on the schedule to finish up the week. Their next home game is 7 p.m. Tuesday against Marshall at Cloquet's Bromberg Field.