Lumberjacks outshoot Esko for the win 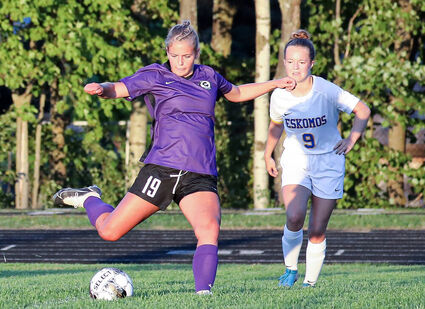 Cloquet-Carlton's Avery Carlson shoots for one of her two goals during Tuesday night's soccer match with Esko.

Every year the Esko and Cloquet-Carlton girls soccer teams meet early in the season and the winner has an opportunity to set the tone for their season ahead. On Tuesday, it was the Lumberjacks who came away with a physical 5-2 win.

Cloquet set the tone for the first half by scoring just 16 seconds in on a long pass from Avery Carlson to Alexa Snesrud, giving the 'Jacks a 1-0 lead.

"Sometimes getting a goal that quickly can work against you," said Cloquet-Carlton coach Dustin Randall. "There is always a weird energy to a Cloquet vs. Esko game. I actually thought we should have had a lot more goals in that first half."

Seconds after the first goal the 'Jacks had another chance on a scramble in front of Esko goalie Hannah Roemer, but Roemer and her defense managed to clear the ball and hold the line at 1-0.

"We got caught on the first goal because there was a breakdown in communication between our center defense," said Esko coach Sharon Lahti. "They thought she was offside and didn't play through, so it was a learning experience for them."

The Lumberjacks had numerous crossing opportunities deep in the Esko zone in the first half and finally broke through with their second goal at 26 minutes on a corner kick that was punched in by Carlson, giving Cloquet-Carlton a 2-0 edge.

The Eskomos had a nice crossing attempt of their own in the 33rd minute, but the 'Jacks were able to knock the ball out of the box and transitioned up field, where they scored on a beautiful left-footed shot from 25 yards out by Kiley Issendorf which settled in the upper right corner of the net for a 3-0 lead at the 36-minute mark.

The second half saw the Eskomos cash in barely a minute into the half when Kaitlyn McConnell broke free and sent a pass to Avery Kuklinski for a goal past CC netminder Katelyn Olson to cut the gap to 3-1.

"During halftime we talked about strategy," said Lahti. "We struggle sometimes when we are not playing a team that is not in a 4-4-2 formation. Dustin was playing a different formation so we talked tactics on how to play against the formation he had going on, and our girls did a really good job of adjusting at halftime."

Unfortunately for Esko, every time they cut the lead, the 'Jacks responded. That was the case when Snesrud headed a corner kick into the Esko net 15 minutes into the half, giving Cloquet-Carlton a 4-1 lead.

"It is something we focus and work on," said Randall. "It is rare when you can score against Esko on those because typically they are pretty good at going up and getting the ball in the air, but we'll take it."

The teeter-totter shifted Esko's way three minutes later on another goal by Kuklinski to cut into the lead again, pulling the Eskomos to within 4-2. That goal came just 30 seconds after the Lumberjacks bounced a ball off the right post.

The scoring ended with nine minutes left in the game when Cloquet's Carlson was able to beat Roemer to a ball in the box and launch a long shot into the net for a 5-2 lead, and that's how things would stay.

Both teams battled hard in a game that featured a lot of physical one-on-one battles for the ball with neither team giving any quarter. 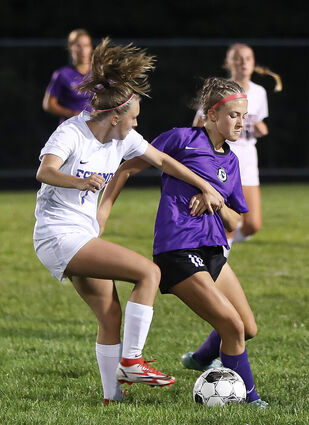 Cloquet-Carlton's Lauren Hughes and Esko's Jordyn Randa battle for possession of the ball during Tuesday's soccer match at Bromberg Field.

"I think our girls get a little more feisty when they get behind," Lahti said. "It's always a battle between these two teams, it always is."

For the game, the Lumberjacks outshot the Eskomos 14-10.

Cloquet-Carlton is now 3-1 on the season after a Monday night game against North Branch; the 'Jacks won 4-1. Their next home game is against Hermantown, at 4 p.m. Saturday, Sept. 10.

Esko is 1-1 on the season with a 4-0 win over Proctor in Esko last Friday. Esko plays at home against Marshall on Thursday, Sept. 8, starting at 7 p.m.