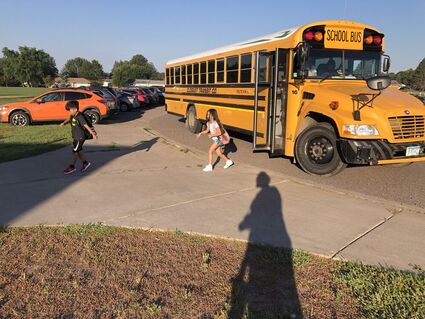 Flaidj and Jej get off the bus and almost skip their way into the school building on the first day of school Wednesday.

There were more smiles than tears Wednesday morning at Cloquet's Washington Elementary School, as students arrived for the first day of school.

The atmosphere was almost celebratory among some families. Moms Carina McKenna and Kelly Bischoff staged a photo shoot for their boys, heading into grades 1, 3 and 4 in the new school year.

"The day has been going great," she said around lunchtime Wednesday. "Students and staff are equally as excited to be back, and it feels like we're picking up right where we left off in June. We're incredibly grateful to get to start the year seeing and sharing smiles with our students."

First-graders Harper Ostby, 6, and Hadley Cool, 7, waited with their parents for the 8 a.m. bell to ring so they could go inside the building. There were no tears in sight.

There may have been a few butterflies that morning, mom Abby said. But only a few.

"She was fired up," said dad Mark Cool.

School officials were ready for "happy and sad" and everything in between, said Esko superintendent Aaron Fischer, reporting a great start to the year on Tuesday.

"The elementary staff is working on providing a great day to ease those emotions of starting a new school year," he said. "They always do a great job."

Cloquet superintendent Michael Cary said school officials are hoping for a normal year in which staff and students can focus solely on learning.

"Our students and staff deserve a year without distractions, like those caused by the pandemic," he said, as public health officials have begun to refer to Covid-19 as entering more of an endemic phase, like influenza. "We are also excited for a year where we minimize the amount of time students miss school."

Indeed. Test scores across the country and the state show that many students lost ground during the pandemic in reading, math and science. At the same time, some are also struggling with mental health and social emotional learning after being isolated from their peers. Local districts have hired extra social workers or counselors, and most are offering extra tutoring for those who need it to catch up.

"While we understand the requirements which were in place during the pandemic, students missed significant learning time due to changes in learning models, quarantine requirements and isolation requirements," he said.

In Wrenshall, students will have to turn off their phones and leave phones in their lockers prior to the day's first bell. They won't be allowed to turn phones back on until the school day is completed.

In Carlton, school officials are not prohibiting phones, but they are stressing safe, smart and respectful use, said Carlton superintendent John Engstrom. 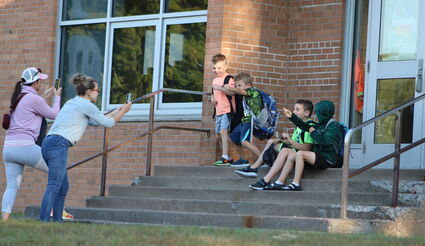 Moms Carina McKenna and Kelly Bischoff photograph their boys, who are not afraid to ham it up for the camera before they head into school Wednesday.

"These devices have become extremely powerful, they've transformed the way we live, think, interact, obtain and share information, and on and on," Engstrom wrote in a message to students. "We are not here to tell you that you have to put your phones away all day, but we are here to tell you that we are not going to allow phones and social media to dominate the school day and be a perpetual distraction and source of tension and conflict."

Engstrom said both the elementary and secondary buildings will be focused on curriculum alignment and learning targets, with a big emphasis on literacy at South Terrace.

Barnum superintendent Bill Peel - who is shared between Willow River and now Barnum - said his focus will be getting to know the students, staff and families in Barnum.

"As a district, we will be looking at completing some facility projects (to include parking lots) next year and the year following," he said. Peel is also focused on bus safety, and is currently working to get a grant to install stop arm cameras on buses.