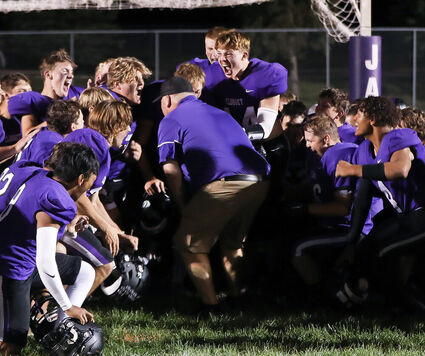 "Overall it was a good first game," Ojanen said. "The kids played hard and seemed to be on top of things. There are things we'll need to work on but that's to be expected."

After stopping the Rails on their opening drive when the Proctor center snapped the ball over the head of the punter, the Lumberjacks drove to the 6-yard line on their first drive, deep in Proctor territory. Junior Carter Horvat pounded the ball into the end zone for the touchdown, then repeated his success with a two-point conversion run, giving Cloquet an 8-0 lead.

Before the first quarter ended, senior quarterback Reese Sheldon slipped in for a 3-yard touchdown run, making it 16-0 following another two-point conversion by Horvat.

With 6 minutes, 52 seconds left in the first half, Luke Keating bulled in from the 1-yard line. After a two-point conversion pass from Sheldon to Dayne Painovich, it was 22-0. Both Sheldon and running back Jordan Boonpa had long runs to set up Keating's score.

"We have a good combination of power and speed in the backfield," Ojanen said. "We have a lot of playmakers who can put a lot of stress on the other team's defense."

With 2:16 remaining in the half, Kollin Bonneville scored on a 6-yard scamper and Cooper Ellena booted the extra point for a 29-0 edge.

Bonneville's score would not be the last in the half for Cloquet. After forcing a turnover, the 'Jacks hit a 49-yard touchdown pass from Sheldon to Bonneville, making it 36-0 at halftime following the extra point kick by Ellena.

"We have the ability to throw the ball and strike quickly with Resse at quarterback," Ojanen said. "Bonneville, who didn't play last year due to an ankle injury, is a big addition to the offense as is having Painovich back at wide receiver."

Cloquet scored on the opening drive of the second half when Horvat bolted around the right side to make it 43-0 after yet another Ellena extra point kick. Horvat's run was set up by another long dash by Boonpa, who gave the Rails fits with his speed.

Boonpa finished with three rushes for 98 yards, Alex Omenge had three rushes for 49 yards and Horvat had four carries for 44 yards, while Sheldon had 39 yards on five carries. Bonneville added 24 yards.

With 2:02 left in the third quarter, Jacob Peterson ran in from 15 yards out on a sweep around the left side of the Cloquet line to push the lead to 50-0 after Ellena's fourth extra point kick.

The 'Jacks finished the scoring in the fourth quarter, when Ed Stone crashed into the end zone from the 5, with Ellena tacking on his fifth extra point making the final 57-0.

Key in the win was the Lumberjacks' defense, which stonewalled the Rails offense all game long. Early in the game the Rails tried to run the ball, only to be constantly snowed under by numerous 'Jacks defenders. 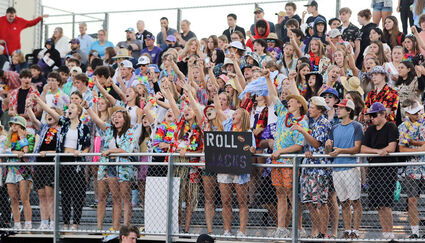 "We always like to set the tone on defense by stopping the run," said Ojanen. "We feel if we can stop the run then we make the other team one-dimensional. We have very good team speed and if you have to throw against us, it allows our athletes to do what they do best and that is to use their speed."

For the game, the Lumberjacks finished with 401 total yards. Sheldon threw for 98 yards and the offense rolled up 305 yards on the ground. Cloquet did not have a turnover in the game, while causing the Rails to turn the ball over twice.

"It wasn't a perfect game, but it was a good start," said Ojanen. "We have a lot of work to do for next week's game at home against Denfeld."