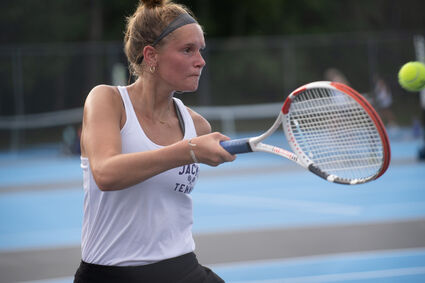 Cloquet senior Araya Kiminski with a high forehand return in her match against Hermantown's Emily Gustafson last Thursday. Kiminski stepped in at No. 1 singles against Superior this week.

After losing 16 players to graduation last season, Cloquet-Esko-Carlton girls tennis coach Derek Johnson figured there could be a falloff in wins and losses this season. However, after picking up back-to-back wins this week, the Lumberjacks are now 5-10 on the season and their head coach is pleasantly surprised.

"We have a lot of new players this season, but they all are working hard and they have been playing very well," Johnson said.

Last Thursday the 'Jacks fell 6-1 against Hermantown, with the lone win coming from Emilie Mattinen at No. 4 singles when she dispatched Campbell Amundson by a 6-2, 6-2 score.

"Emilie is a sophomore and played really well against Hermantown," Johnson said. "She doesn't hit a lot of winners but she does a nice job of being consistent and going into long rallies. She's done a nice job this year of being mentally tough and not allowing anything to distract her."

Seniors Alexis Goranson and Jordyn Rahkola are serving as team captains this season with Goranson playing No. 1 singles in most of the matches so far.

"Goranson has had the tough task of playing No. 1 singles," Johnson said. "She's been battling at that spot in every match and that is all we can ask from her. The nine to12 other players that have seen varsity playing time have done a good job as well. This level of play is all new to them and they have competed hard."

On Monday, the Lumberjacks knocked off Superior 5-2. CEC's Araya Kiminski stepped in at No. 1 singles and fell in a tough match to Sydney Friedrich. At No. 2 singles, it was CEC's Addison Ranta falling in a narrow 7-5, 6-3 match to Lexi Johnson. However, Cloquet notched a win at No. 3 singles from Emilie Mattinen and at No. 4 singles from Paige Goranson. 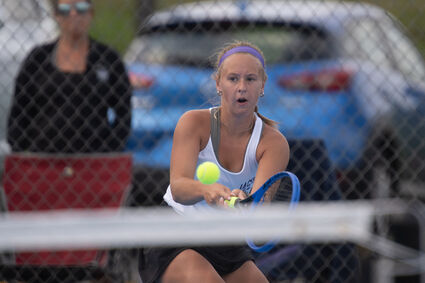 Cloquet senior captain Alexis Goranson with a backhand return early in her first set against Hermantown's Haily Landrigan last Thursday. Goranson has played No. 1 singles in many of the matches so far.

On Tuesday the Lumberjacks hosted Duluth Denfeld and came away with another impressive win - this time winning 6-1 over the Hunters.

After an opening loss at No. 1 singles, the Lumberjacks ran the table Tuesday. At No. 2 singles, Addison Ranta won 6-1, 6-0 over Zaidea Kinziger. Emilie Mattinen scored a win at No. 3 singles while Paige Goranson won by forfeit at No. 4. All three of the singles winners are sophomores.

"We knew coming in it would be a tough year and I've been impressed with our fight in matches and our attitudes," Johnson said. "This team has been positive. We have a tough section and we will continue to battle and get better each and every day."