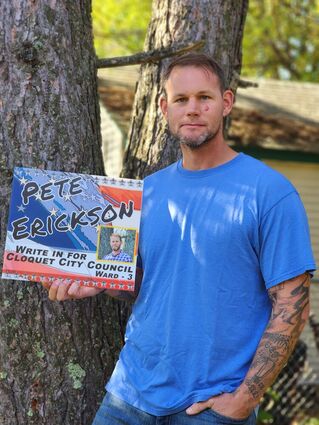 Cloquet Ward 3 city council candidate Pete Erickson has a unique challenge this fall: he has to get voters to do more than fill in a box next to his name.

For Erickson to win, voters will have to actually write his name, and NOT fill in the box next to the listed candidate's name: Chris Swanson. In the meantime, Swanson is running his own informal "Please don't vote for me" campaign, after moving out of Ward 3 and stepping down as councilor in August.

August was too late to change the ballots for November, however, and too late to call for more people to file for office. That meant Swanson's name will be there in November.

Erickson has signs out and he's been making the rounds of Ward 3 when he can, mostly trying to catch people when they're outside doing things. But he's saving a big push for the last week of the election season.

"I don't need people to remember me today, I need them to remember my name in November, and write it on the ballot," Erickson said.

So far it seems Erickson is the only person running a write-in campaign, although Swanson said he's fielded a couple calls asking about the job. City clerk Kristine St. Arnold also said she's unaware of any other candidates for Ward 3, although there is no filing requirement to campaign as a write-in.

Erickson is married to Becky Erickson and they have four children: Alec, 17, Elijah, 13, Julianna, 11, and Josiah, 8. Pete has been a firefighter/paramedic with the Cloquet Area Fire District (and Cloquet fire department before that) since 2007. He's also in the Minnesota Air National Guard, and is a landlord. But he can make time to do a good job on the council, he said.

Asked what spurred him to run, Erickson said it's time.

"I've spent a lot of time whining about city politics, but not being a part of it," he said. "My kids are older now, and my interests have gone from being self-absorbed to being more involved in my community and my ward. This is a beautiful place to be. I want to do what I can to make it better, to make our young people want to stay. That starts at the city level."

Council seats are nonpartisan, and that suits Erickson. He doesn't want to be put into a box. He's a union member, but a fiscal conservative. He has a whole list of issues on his mind, including cracking down on negligent landlords and attracting more businesses to Cloquet, especially another nice sit-down restaurant.

He said he might not be super-well-known, but he has a good idea of what goes on in Cloquet.

"My job takes me into different residences in the city, also I'm a landlord," he said. "My pet peeve is landlords who treat their tenants like piggy banks. That's certainly not all landlords."

He'd like to see the city develop an inspection schedule and rental licenses to help both tenants and keep the housing stock in better condition.

"We just had a building on Eighth Street [deemed uninhabitable]," he said. "It never should have gotten that far. Now all those apartments are gone."

He's also excited by the week-to-week parts of the council job: digging into the budget, making decisions about funding priorities.

"I want to know the inner workings, be inside the discussions," he said.

Even if no one else runs as a write-in candidate, Erickson could still lose to Swanson.

If Swanson gets the most votes, city administrator Tim Peterson said the council would have to appoint an interim Ward 3 councilor until a special election is held, likely in November 2022.

Ward 3 residents: look for write-in council candidate Pete Erickson in late October, early November, or on Election Day, standing as far away from the City Hall polling place as he is legally required, and not a step farther. He'll be reminding people of his name, so they can write it on their ballots since the only person on the ballot no longer lives in the ward.

Cloquet's Ward 3 basically lies between 14th Street and Highway 33 from east to west, and Doddridge Avenue to Avenue B from south to north.