For 24 football seasons, Dave Louzek has been at the helm of the Moose Lake/Willow River Rebels. During that time Louzek has clung to a philosophy that regular-season games are solely used to get a team ready for the playoffs.

"That is one of the reasons we always try to schedule Hermantown in the first game of the year," said Louzek. "It allows us to play a good football team that exposes our weaknesses and allows us to learn more about what we have to do to get better."

After an opening season loss to the Hawks, the Rebels have rebounded to notch two straight wins - including a 48-14 thumping of Greenway/Nashwauk-Keewatin last Friday night.

The first two times the Rebels touched the ball Friday, they scored. Kaden Robbins scored the first touchdown on a 78-yard run. Jaxsyn Schmidt scored the second - a 73-yard run - with Schmidt providing a 2-point conversion run on Robbins' score and Robbins doing the same on Schmidt's score.

"Our goal is to always establish the run and that is what we do," Louzek said. "We have always run the double wing and we will continue to do so as long as I am the coach here."

The success of the program is legendary and the success on Friday night was obvious, as the Rebels rolled up 582 yards of total offense with 486 of those yards coming on the ground. Schmidt ran for a whopping 281 yards on six carries with four touchdowns and Robbins added 84 yards and a score.

"Jaxsyn was not even a starter for us in the first game and in the last two games he has 500 yards rushing," Louzek said. "We lost Jackson Thompson to an injury and Schmidt got his chance and he is showing just how good he can be. In the long run, when we get Thompson back, it will just add to our depth."

The Rebels had also lost Luke Danelski, a stellar lineman, to injury, but both Thompson and Danelski should return over the next few weeks.

After taking a 16-0 lead early, the Rebels got three more touchdowns from Schmidt in the second quarter on runs of 34, 29 and 59 yards as they rolled to a 34-6 halftime lead.

In the third quarter, Robbins caught a 37-yard pass from Adam Neumann for a touchdown, then Dawson Mortenson tacked on the 2-point conversion run to make it 42-6. Right before the end of the quarter, Luke Dewey slashed in from 44 yards away and pushed the lead to 48-6.

GNK added one late fourth-quarter touchdown for the final margin of 48-14.

On the defensive side of the ball, the Rebels allowed 264 yards to GNK. 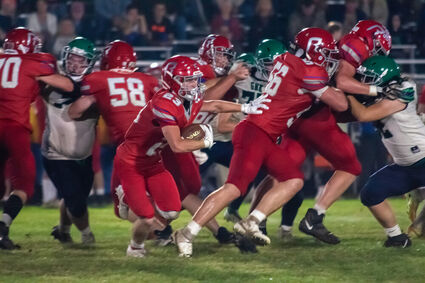 Rebels running back Jaxsyn Schmidt follows a block from Austin Johnson (No. 56) on a run play during Friday night's matchup against the Titans.

"Our defense played well," Louzek said. "Our senior captain, Jimmy Walker, is playing really well for us, as is pretty much everyone on that side of the ball."

Nick Jusczak was in on seven tackles for the Rebels while JP Mesojedec was part of eight tackles.

"I am very happy with the progress we've made so far, and I stress to the kids our goal is to get better each week and we can live with the results," Louzek said. "Our goal is to be playing faster each week. Over the course of the season - if we are fast and physical - we know we can compete at the state level."

Per usual, the Rebels appear to be heading in the right direction under the longtime leadership of Louzek.

"Every year we look to be a good, hard-nosed, fast and physical football team," Louzek said. "If we can do those things, and be consistent, we think we always have a chance at being competitive for a section championship and a state tournament run."