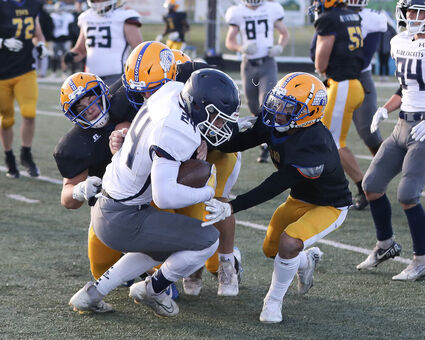 The Esko football team continued its impressive undefeated season last Friday with a 77-6 homecoming romp over Hibbing. The win improved the Eskomos record to 6-0.

"Right now our defense is very stingy and they don't just get upset about teams scoring on us, but they get mad about giving up first downs - that is how high their expectations are," he said.

Esko scored 28 points in each of the first and second quarters to build a 56-0 halftime lead over the Bluejackets.

Scoring in the first quarter were Nolan Witt on a 14-yard run, Owen Wilson on a 43-yard pass reception from Ty Christianson, Koi Perich on a 16-yard pass from Christianson, and Perich again on a 38-yard run. All four first-quarter scores were followed up by extra-point kicks from Wyatt Hudspith.

The second quarter saw Perich score on a 55-yard punt return and Javontae Gregory score on a 20-yard scamper. Perich added a 6-yard catch for a score from Christianson and Gregory ripped off a 19-yard touchdown run. Like the first quarter, Hudspith kicked all four extra points for the 56-0 halftime margin.

"It was kind of an interesting first half, because we only ran 14 offensive plays," Arntson said. "On offense, our quarterback, Ty Christianson, has done a great job of complementary football and getting the ball to the right person all season. He's really an underrated key to our team."

As the third quarter began, the Eskomo starters were on the bench as the reserves took over and finished out the game.

"Our junior varsity is pretty much the same team as it was last year, because we didn't lose very many players off our varsity team," Arntson said. "Our competition at practice between our ones and twos is impressive."

The coach explained the JV team's dominance was more impressive at their level than even what the varsity was accomplishing.

"Some of the reason you are seeing our scores so high is because we don't have a dropoff," Arntson said. "We are playing our reserves in those games, and we aren't keeping the starters in, but the second group is so good that there just isn't any notable difference."

In the third quarter against Hibbing, Jacion Owens scored on two impressive runs of 45 yards and 57 yards, respectively, as Esko went up 71-6 entering the final stanza.

Esko's final score of the game was on a 29-yard run by Ethan Kilichowski.

On the season the Eskomos have scored 317 points in six games for a nearly 53 points per game average. They've given up only 36 points all season. 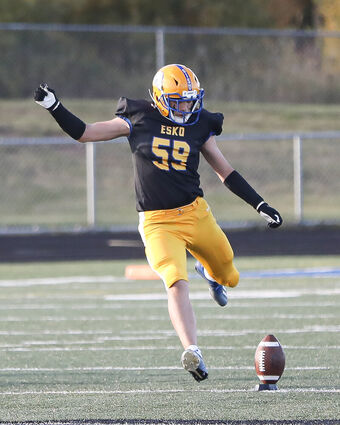 Esko's Wyatt Hudspith kicks off after another Esko touchdown. The Esko kicker also made all nine of his extra-point tries in Esko's 77-6 win over Hibbing on Friday.

Those numbers are enough to get the attention of coaches across the state who believe Esko has a shot at getting back to the state championship game. The Eskomos won the state tournament in the fall of 1975 and last season had a nice run in the playoffs before bowing out in the semifinals.

If Esko wants to continue its impressive regular season run, they would need to do so on senior night this week against the Aitkin Gobblers at 5 p.m. Thursday, after this issue of the Pine Knot News went to press.

"Aitkin is always super well-coached," Arntson said Monday. "They always have tough kids and they will come to play."