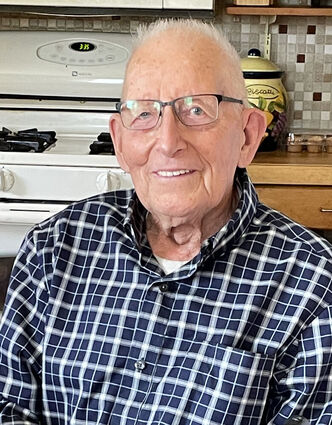 Arthur Edward Wirtanen, 94, peacefully passed away Oct. 6, 2022, at St. Luke's Hospice in Duluth. He was born in Stoney Brook Township, just outside of Cloquet, on May 1, 1928, to John and Tyyne Wirtanen. Art was educated in the St. Louis County school district and graduated from Brookston High School in 1946. During high school he worked at the Potlatch paper mill in Cloquet, followed by a brief stint with the U.S. Merchant Marines on the Great Lakes after graduation.

While working at the Wood Conversion mill in Cloquet, he was drafted into the Korean War by the U.S. Army and spent two years in France. He was a proud veteran throughout his life. After the war, he returned to his job in Cloquet and purchased his parents' homestead farm. He met Myrtle Maki in 1955. They began building a home in 1959 and were married on Sept. 10, 1960. They had three children, Gail in 1961, Judy in 1963, and Dean in 1966.

Art worked as an instrumentation mechanic at the Wood Conversion mill, later Conwed, for 35 years until the company was purchased by the USG Corporation. He later worked at the Brookston transfer station until retiring in 2006.

The Wirtanens made the most of their 80 acres, raising beef cattle and chickens, and maintaining a fine garden. Art enjoyed harvesting maple syrup and was a champion wild blueberry picker. Their home was heated with wood cut and split in the backyard.

He enjoyed hunting and fishing, bagging one of the largest deer of his life when he was 83 years old. He took his family camping several times each summer and traveled to Alaska and Finland.

Art was proud of his Finnish heritage, speaking Finn with close friends and family and participating in a Finnish choir. He could build a roaring sauna fire in an instant.

He faithfully attended the Big Lake Chapel in Cloquet and served on its board. Art was a fire warden for more than 50 years and served as treasurer for Stoney Brook Township for 35 years.

Art is survived by Myrtle, his beloved wife of 62 years; children Gail (Blaine) Brecht of Baxter, Judy (John) Miner of Duluth, and Dean (Karen) Wirtanen of Eau Claire, Wisconsin; sister Helen (Sherman) Wisneski of Cloquet; brother Donnie Atkinson of Florence, South Carolina; and 12 grandchildren and three great-grandchildren. He was preceded in death by his parents; his sisters Martha, Irene and Esther; and his brother Paul.

Visitation: 4-7 p.m. Friday, Oct. 28, and continuing at 10 a.m. until the 11 a.m. memorial service Saturday, Oct. 29, all at St. Paul's Lutheran Church in Cloquet. Full military honors will be presented by the Cloquet Combined Honor Guard. A private burial will be held at Perch Lake Township Cemetery. To leave an online condolence, visit http://www.nelsonfuneralcare.net.