It was a tale of two halves for the Esko girls soccer team at the state tournament last week. The Eskomos started slow before mounting a furious rally Thursday, Oct. 24, but came up short on the scoreboard in a 4-2 Class A quarterfinal loss to St. Anthony Village.

Head coach Sharon Lahti said her team played well in their first trip to State since 2011.

"We were a little on our heels, and I think that came from nerves and I attribute it to lack of playoff experience," she said. "But this was something we can build on as we move forward."

Entering the game, the Eskomos were concerned about Eileen Cordona, a strong midfielder for the Huskies.

"We knew she was good and we would have to track her," said Lahti. "We knew they would hit some diagonal balls and they had some fast players."

Anna Isaacson scored the first goal of the game for St. Anthony, but then both teams had solid chances. Finally, it was Cordona who hammered home a goal late in the first half to make it 2-0.

A wild sequence of events saw Esko's Jordyn Randa head a ball into the net off a nifty pass by Britta Koski, which cut the lead to 2-1. Just 10 seconds later Cordona uncorked her second goal to make it 3-1.

"We responded well to that first goal by Eileen," said Lahti. "Then they got another one back after we had cut into the lead."

With 11 minutes left in the first half, the Huskies struck again, utilizing their speed as Isaacson punched home her second of the game. St. Anthony held a 4-1 lead entering halftime.

"You could see our girls deflate a bit after that third and fourth goal," Lahti said. "At halftime, we talked to them about responding, and we did just that. I thought our second half was a good one even though we lost."

With 22 minutes left in the game, Esko's Kaitlyn McConnell found a loose ball after a corner kick and pounded it home, cutting the gap to 4-2.

The half belonged to Esko, even if the game did not. Following McConnell's goal, the Eskomos resumed their offensive attack and hammered shot after shot at Huskies netminder June McGrath. But the junior goalie was able to thwart all the shots Esko could muster, aided by a post or two late in the affair. 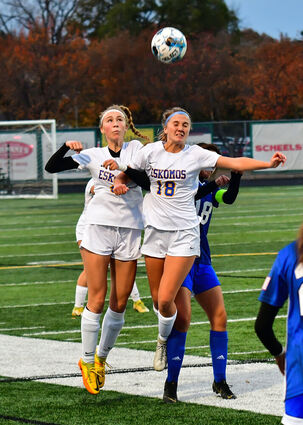 "I was really proud of the effort by the girls," Lahti said. "In that second half we looked like a completely different team."

With the quarterfinal loss, Esko fell to 15-3-1 on the season. The team will lose only two seniors: Ava Korby and Avery Kuklinski. After the game, the team met for a long time to talk about the season and to share the joys and tears that a season-ending game brings.

"We talked about looking back to the start of the season and about all the things that happened," Lahti said. "We had a new coaching staff, new concepts, and then we talked about how far they have come and what they have accomplished. I am so proud of all of them."