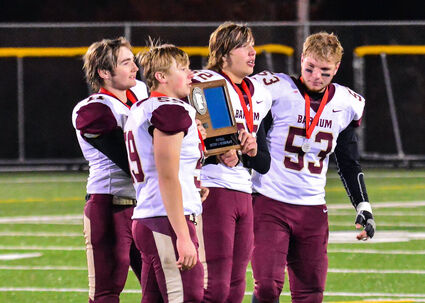 While he decided to try a year as the Barnum football team manager, holding a clipboard wasn't quite then freshman Ryan Manahan's thing.

After some convincing from Bombers assistant coach Josh Earlywine, Manahan made a comeback his sophomore season, as the wide receiver ditched his statistics tallying for tallying touchdowns in the end zone instead.

Manahan caught his final prep touchdown in helping Barnum battle Deer River, but falling short during a 26-14 loss in the Section 7A championship game before 1,000 fans Friday, Nov. 4 at a chilly Terry Egerdahl Field in Proctor.

Despite the now senior's last grab in the end zone not being enough to get the Bombers to their first state tournament since 2012, Manahan isn't second-guessing his prep return to the gridiron.

"It's probably one of the best decisions I've ever made," said Manahan, who reeled in 16 catches for five touchdowns this season. "I'm happy I stuck with it. It really paid off."

Not only was the 5-foot-9, 160-pound wideout an offensive weapon this fall, but Manahan was a machine on defense, recording 77 tackles, 12 for a loss, and two fumble recoveries - all team-highs.

It was that defense which led the Bombers into last week's 7A title rematch with the Warriors, who defeated Barnum 32-8 a season ago.

Last week's game was far closer, as Barnum jumped to an 8-0 lead after the first quarter on a quarterback Hayden Charboneau-to-Manahan touchdown pass of 26 yards. Unbeaten Deer River (11-0) responded for a 12-8 advantage by halftime on a pair of touchdown tosses from standout quarterback Sam Rahier.

Rahier found the end zone again - this time with his legs - on the opening possession of the third quarter, racing for a 41-yard keeper to make it 18-8.

Not to be outdone, Barnum (7-4) bounced back to make it 18-14 on Charboneau's chuck of 4 yards to Caden Sheff, only to recover an onside kick a play later to send the Bombers' faithful into a frigid frenzy.

"We never had to worry about their effort," said Barnum coach Bob Minkkinen.

One snap following the wild special teams recovery, a Barnum fumble was recovered by the Warriors.

Rahier later found teammate Ethan Williams for the second of his two receiving touchdowns midway through the fourth quarter to put things away.

Rahier, a 5-foot-10 signal-caller who has been starting on the Warriors varsity for four years, had a hand in all of Deer River's four touchdowns en route to their fifth consecutive 7A championship.

Minkkinen would agree about his boys in maroon and gold, as the former Barnum graduate took over his alma mater three years ago and has been on the climb ever since. The Bombers have won 14 games the last two seasons, or more than four times as many as the three they won the two years before.

"I'm excited for the program for years to come," said Manahan. "I think it's turning for the good.

"All that credit has to go to the kids - they're buying into what we're saying. We couldn't ask for better. It's a true honor. Just hats off to our kids. They never say no. They never quit. They battle all the way until the end." 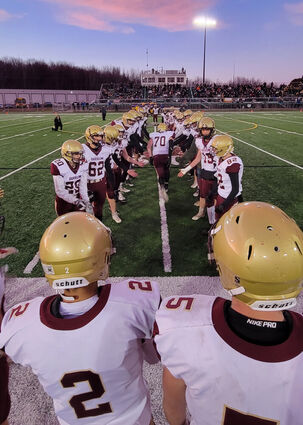 Mark Hall runs through a gauntlet of players during introductions before the championship game that began under a spectacular sunset.

That was best on display when Rahier was racing for what looked like another long touchdown in the waning seconds. Charboneau chased him down and tackled his ankles, preserving the final score.

"We always play to the end," said Charboneau.

"That was a cool moment," added Manahan. "Especially for a junior to do that for us seniors."

While 12 seniors graduate, Charboneau and Barnum have a reason to be motivated, seeking a potential third straight trip to the section final next fall, against the familiar Warriors.

"We're hoping to see them back there," said Charboneau.

Manahan, who now moves on, sure thinks they can, especially with the now rejuvenated program he adored playing with for two championship games.

"To get there two years in a row was really special," he said. "I enjoyed every minute of it."