Twists coming on the road to Oz 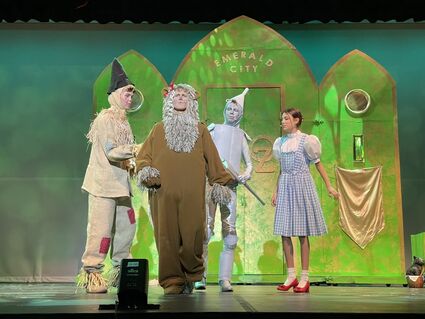 The iconic foursome of Dorothy, the Tin Man, Scarecrow and Cowardly Lion hit the yellow brick road this weekend in the Cloquet High School production of "The Wizard of Oz."

There will be no place like Cloquet High School to see the production of the popular "The Wizard of Oz" this weekend. A cast and crew of nearly 80 students will bring Oz to life with the familiar and not so familiar.

Inspired by the children's novel written by Frank Baum in 1900, "The Wizard of Oz" film was released in 1939 and became a classic for the ages.

"Its theme of love and hope is timeless. Who doesn't love that?" said Lily Rosen, who plays a Munchkin in the Lullaby League trio.

Those familiar with only the movie will find some twists in the high school adaptation. Director Iris Keller said there are three script versions available for stage performances. She selected a script that expands on some scenes while staying on a line with the familiar film.

"Everyone knows the show and the famous lines from it," Keller said. "I wanted to keep those elements but let the cast bring their own flavor to the roles."

The changes flesh out the fantasy world by subtly building upon the characters. Examples include an explanation of how the Tin Man became tin or why the Wicked Witch's castle guards do their iconic chant.

Keller hopes the audience will remember the feeling of watching "The Wizard of Oz" for the first time. "It really is a classic. I hope they will be immersed in the set, costumes, music and lighting effects we have for them, and walk away with a sense of awe," she said.

It is a big production and the school's theater department has been fortunate to receive support from community volunteers. More than 20 people stepped up to help with elements ranging from building the set and props to designing costumes and lighting effects. 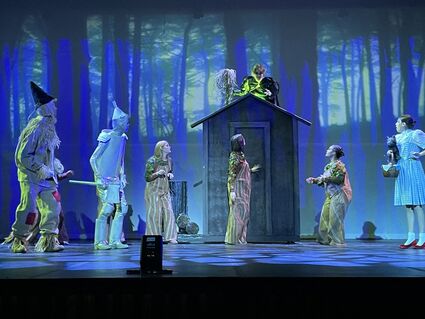 The Wicked Witch, played by Ellie Evenson, sneaks up on Dorothy and her companions and throws a fireball at the scarecrow. "What, you don't want to be my old flame, Scarecrow?" she asks.

"The backstage crew [members] are often the unsung heroes of any production, and this one is no exception," Keller said. "It takes hours and hours of work to take a design that is scratched out on paper and make it a reality."

After being involved in 27 productions - the past two years as the musical director - this will be Keller's final school show, as she will retire after the school year.

According to several members of the cast, this show has stood out as an exceptional experience in their acting career. "This is Iris' last show, so we are putting a lot in to make it a good one" said junior Marissa Witte, who plays Glinda.

"The Wizard of Oz" starts at 7 p.m. Thursday, Friday and Saturday, with a 2 p.m. matinee on Sunday. Runtime is approximately 2 hours and 15 minutes with an intermission. Tickets are $12 for adults, $10 for students grades 7-12, and $5 for children in grade 6 and below. Purchase tickets in advance online to ensure availability; the remaining tickets will be available at the door. Find the Wizard of Oz poster at isd94.org to buy tickets.