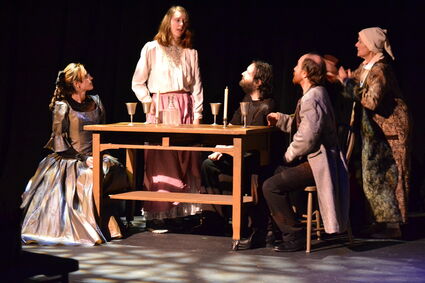 The County Seat Theater Company will present "A Christmas Carol" at 7 p.m. Dec. 2, 3, 7 and 9 with 2 p.m. matinee performances Dec. 4, 10 and 11 at the Encore Performing Arts Center in Cloquet. The theater is still awaiting permission to view the show on demand but is hoping to offer online viewing Dec. 9-11.

The County Seat Theater Company will bring "A Christmas Carol" to the stage again, but a more spirited and fanciful version, featuring a swirling, dancing chorus of ghosts who weave through this uplifting holiday story of redemption, magic and hope.

"The show starts with Scrooge in bed, surrounded by the ghosts and spirits, having a fitful, nightmare-filled sleep atop the bed covers," said County Seat general manager Joel Soukkala. "Throughout the whole show, the apparitions are constantly floating around along with the usual ghosts of Christmases past, present and future."

Scrooge is played by Ruthie Breuer, who directed her husband, Rick, in a one-man-show version of the play before and during the pandemic. She debated auditioning after being immersed in the play for two seasons already, but her love of the classic tale overcame any doubts. The fact that director Greg Anderson announced he was doing "gender-neutral casting" clinched the deal.

"Anderson didn't necessarily seek out a female to play this role but went into casting with an open mind and, in my opinion, cast this show perfectly," Soukkala said, explaining that the characters themselves retain their gender, but men and women were invited to audition for whatever role they wanted.

Opening night next Friday is coming up fast, but Soukkala said they will be ready, despite some Covid complications and other challenges.

There are 18 cast members in this show, many playing two or more roles.

"We are so excited to welcome a number of new actors to this show," said Soukkala. "Actors of all ages and from all over Carlton County and Duluth - it is truly a community production!"

The County Seat Theater Company will present live performances at 7 p.m. Dec. 2, 3, 7 and 9 with 2 p.m. matinee performances Dec. 4, 10 and 11 at the Encore Performing Arts Center in Cloquet. The theater is still awaiting permission to view the show on demand but is hoping to offer online viewing Dec. 9-11. Tickets can be reserved by calling the box office at 218-878-0071 or online at http://www.countyseattheter.com.

Soukkala said the story by Charles Dickens is a fan favorite.

"We're hoping to do it every two or three years, because people love it so much," Soukkala said, noting that this season's play is an adaptation by Michael Wilson. "We may never repeat the same one, there are so many versions of it."

During the run of this show, the Encore Art Gallery will feature a variety of work by over 20 local artists. Much of the art is available for sale and would make great Christmas gifts. The theater is open daily, but you may want to call ahead to confirm times as hours can change. The theater will have gift certificates as well as season passes available for the 2023 season.

"We have a great lineup for our 36th season," said Soukkala. "There is something for every audience member and actor - comedy, drama, one acts, family shows and musicals - we have it all!"