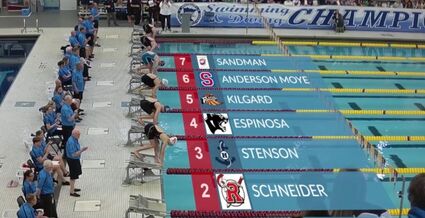 Photo from the high school league's livestream of the meet.

Hannah Sandman swam a time of 2:02.25, just slightly behind the personal record of 2:01.90 she set in the Section 7A meet. But the competition at State was really tough, with the top swimmer in the preliminaries finishing the 200-freestyle race in 1:53.28.

The Cloquet-Esko-Carlton girls swim team's season came to a close officially after the Minnesota state meet was held last weekend in the Twin Cities. Senior Hannah Sandman was the lone Lumberjack to qualify for State: she swam in the 200 freestyle Thursday at the Jean K. Freeman Aquatic Center on the campus of the University of Minnesota.

While Sandman was the only CEC swimmer, she was joined at the state meet by numerous teammates, there to support their teammate. Head coach Rachel Peterson was also on hand to coach her senior star.

"I think I counted about 20 people between family and fans that were there to support Hannah," Peterson said. "She swam phenomenal. While she didn't make the finals, we are so proud of her."

Preliminaries were held Thursday with finals on Friday. Sandman swam a time of 2:02.25, just slightly behind the personal record of 2:01.90 she set in the Section 7A meet. But the competition at State was really tough, with the top swimmer in the preliminaries finishing the 200-freestyle race in 1:53.28.

Sandman said she felt the most nerves walking into the aquatic center.

"When we walked in, the first thing I saw was a team of girls all from the same school who had all qualified for the state meet," Sandman said. "Here I was all alone, so it was a little intimidating and nerve-wracking. The atmosphere was tense with a lot of nervousness, but a lot of excitement at the same time."

Despite the nerves, Sandman swam one of her best career races.

"I felt good going into the meet," said Sandman. "I was nervous, but once I jumped into the water and started swimming I just did what I've been trained to do, and I did my best."

Sandman competed in her second state tournament after swimming on the 200-freestyle relay team when she was in middle school.

"I've been trying to get back to State since eighth grade," said Sandman. "When I realized I qualified in sectionals I was so excited. I couldn't believe it!"

Peterson said seeing Sandman swim at State (and wrapping up her career in Cloquet) was tough, yet fun to watch.

"It really was a bittersweet moment," said an emotional Peterson. "It was great to see her accomplish her goal, but it will be sad to have her graduate because she is just a great person and was such a good leader for our program.

Now that she will be graduating and attending the University of North Dakota, Sandman has some advice for younger teammates and potential CEC swimmers in the future.

"My message would be to keep working hard because it pays off," Sandman said. "You have to put the work in to have success."