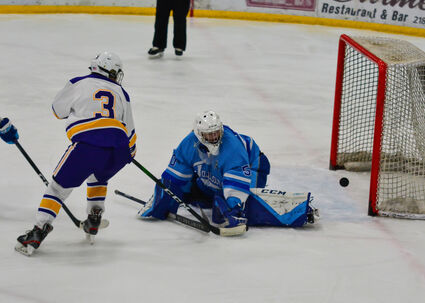 If strength of schedule is important to developing a hockey team during the regular season, then the Cloquet-Esko-Carlton girls hockey team is on the right track.

The 'Jacks opened the season on Nov. 12 at Anoka followed by back-to-back home games against South St. Paul and Bloomington Jefferson. Despite going 0-3 in that stretch, there is reason to be optimistic.

In their opening game road loss to Anoka, the Lumberjacks fell 2-1 in overtime to the Tornadoes.

"We have a lot of new faces in the lineup and we started slow," said first-year coach Kennedy Houge. "Emily Litchke tied the game late in the third period. We played really well in overtime, but we ended up losing a tight game."

Veteran CEC goalie Araya Kiminski made 21 saves on 23 shots as the Lumberjacks outshot the Tornadoes 24-23.

A slow start in Friday's home opener proved to be costly as the Lumberjacks played perennial power South St. Paul and fell by a 3-0 score.

"South St. Paul is always strong year in, year out," Houge said. "They are fast and they have a rich history of going to the state tournament."

The Packers scored all three goals in the first period, but after the opening stanza the 'Jacks clamped down defensively and held them off the scoreboard the rest of the way.

"As the game wore on we did have offensive opportunities," said Houge. "We have been in a snakebitten pattern as far as scoring goals. We've been creating chances, but we haven't hit the back of the net like we need to."

On Saturday, the Lumberjacks hosted the Bloomington Jefferson Jaguars and lost 3-2 despite grabbing an early 1-0 lead on a first-period goal by Gwen Lilly at the 5-minute, 16-second mark. The Jaguars answered with a pair of goals of their own before the period ended and took a 2-1 lead.

"It was a similar pattern as the first two games," said Houge. "We lacked a little intensity, but as the game wore on, we got better. I think that all has to do with the inexperience our team has."

Just 23 seconds into the third period, Jefferson went up 3-1 on a goal by Allison Wolfe, but the Lumberjacks answered just five minutes later on a goal by Erin Loeb with an assist to Litchke to cut the score to 3-2. That was all the closer the 'Jacks would get as they took their third loss of the season.

"We played hard, but just couldn't get over the hump," said Houge.

Despite the losses, the first-year coach is happy about the prospects for the season.

"When we build the schedule we want to learn what we have to do to get better," said coach Houge. "We have a lot of new players without varsity experience who are learning all their new roles. Some of them are in roles they didn't expect, so it will take some time, but we've adjusted in the second and third period of all three of our games and we are getting better."

The Lumberjacks added 12 new players to the program and have a total of 33 girls on their varsity and junior varsity rosters this season, including eight seniors.

"This is the first year in a while where we've had comfortable numbers for both our varsity and junior varsity," said Houge. "Right now we need to learn to come out to play from the start of the game."

The Rebels are coming off one of their best seasons in school history and return nearly their entire team. 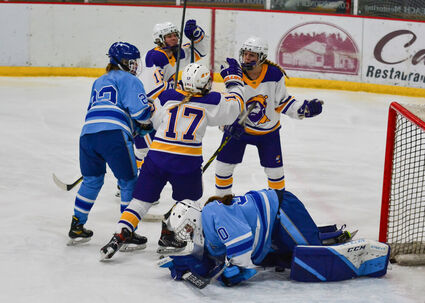 "They have a team that they have been building for a few years now and they are good," said Houge. "It will be just another good test for our players to see how they react."

Moose Lake Area girls hockey team is off to a good start, winning its first two games of the season last weekend. The Rebels defeated Minneapolis 5-2 Friday, Nov. 18, and then overcame Litchfield/Dassel-Cokato by a score of 1-0. The Rebels were hosting the CEC girls team in Moose Lake Tuesday night after this issue of the Pine Knot News went to press. Read all about that story in next week's paper.