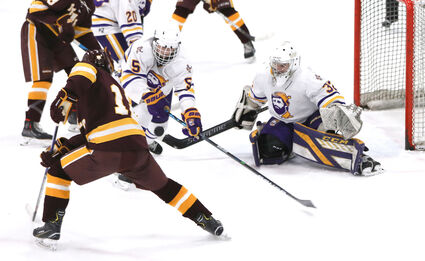 To say that Cloquet-Esko-Carlton boys hockey coach Shea Walters is excited about this season may be an understatement. Walters thinks this year's version of the Lumberjacks has a chance to be a good team. Very good, in fact.

Last week, the 'Jacks showed their potential with a 6-1 thumping of a respected Denfeld team.

"We are a physical, fast team, and once we got started in that first period we just took off," Walters said of the Dec. 8 game.

Just 1 minute, 28 seconds into the opening period, Ryan Jones was called for hooking, but CEC easily killed off the penalty before starting an impressive scoring barrage which put them up 4-0 at the first break.

CEC's first goal was scored by Joey Antonutti at the 4:17 mark with assists going to Jones and Lucas Rauner. Just 9 seconds later, freshman Cole Painovich gave the 'Jacks a 2-0 lead with Alex Kazel and Ethan Kilichowski picking up the assists. Before the period ended, the 'Jacks got goals at 10:19 from Antonutti and at 14:48 from Kilichowski. Pat Dunaiski and Rauner assisted on Antonutti's second goal and it was Owen Wilson and Cooper Ellena assisting on Kilichowski's goal.

"Our guys were very hungry and went into the hard areas of the ice and were successful," Walters said. "Our penalty kill got us going in that first period, and then the guys got hungry and wanted to feed, and that gave us the momentum."

Denfeld cut the lead to 4-1 just 2:37 into the second period, but the Lumberjacks went up 5-1 on a hat trick goal by Antonutti at 12:36 of the second with assists going to Jones and Rauner.

"Joey is a super physical, strong and tough player," Walters said. "That line with Joey, Cole Painovich and Jones has played well together."

Jones got the final goal of the game less than five minutes into the third with Dayne Painovich and Karson Young adding assists.

A big key to the Lumberjacks victory was the play of the defense, Walters said, including the penalty kill and solid goaltending. 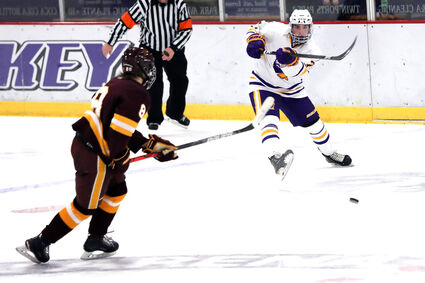 "Our defensemen are very good and they create a lot of openings with their creativity and puck movement," Walters said. "We continue to play great on the penalty kill and we don't look at it as negative. When you are a contact team, you will get penalties and that just comes along with it. Right now, I can use any of our guys to kill the penalty, because they work hard at it and they take pride in not allowing the other team to score."

"Logan played well, but we've been rotating him and Caden Kubis, because they both are playing well," Walters said. "We have a lot of good goalies at the varsity and junior varsity level and we are trying to learn exactly where everyone will fit in."

The 'Jacks improved to 3-1 on the season on Tuesday, when Kubis posted a shutout, beating Proctor, 2-0. Kubis made 24 saves.