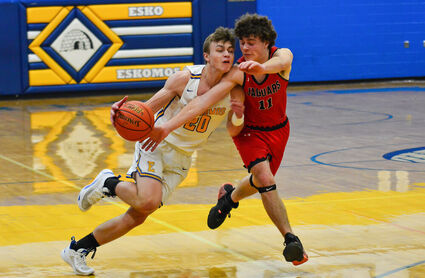 Esko's Cuinn Berger tries to drive through Hinckley-Finlayson's Seth Olson on a drive to the basket during an Esko win Tuesday in the Coaches Classic tournament in Esko.

Buzzing around in her yellow Esko girls basketball sweater Tuesday, Sue Northey greeted fans with hugs as they entered the school, made time for an interview, and eventually coached her Eskomos to victory on Day 1 of the 42nd annual Coaches Classic holiday basketball tournament at Esko High School.

Northey, who spent 18 years at the Eskomos' helm before returning this winter after 14 seasons away, thoroughly enjoys the event in honor of the late Jack Johnson and sponsored by the Esko Sports Alliance, including the on-court competition, off-court connections and one more thing: "I guess I like sleeping in my own bed, too," said Northey with a laugh.

Northey slept a little easier Tuesday night, as earlier in the day, her Eskomos (3-3) eased by Cherry, 62-40, in their tournament opener behind 10 scorers led by Kallie Sinnott's 11 points.

Points were hard to come by in the opening half for the visitors, as the Eskomos tamed the Tigers for a 33-15 halftime lead. Esko never looked back.

"We've definitely gotten a lot stronger from the beginning of the season," said Esko junior Kyra Johnson, who scored seven points. "We're connecting. People are stepping up. And we have numbers that can play anywhere. I like that most - we can put in a whole new set of five people and still have the same attack."

While Johnson admitted learning Northey's new system has been "hard," their team cohesion has only been on the incline. Northey agreed, noting her abundance of athletes has been getting better daily.

"All of our kids have had to step up," Northey said. "We feel we have 10 to 11 girls that can go in and do something positive on the court."

Esko faced Hermantown, 63-41 winners over Solon Springs on Tuesday, for the four-team tournament title on Wednesday, Dec. 28, when this edition of the Pine Knot went to press.

In that contest, Northey was set to face fellow head coach Beth Clark, who's been at the Hawks' helm for 35 years. Together, the pair of prep coaching stalwarts have a combined 54 years on the sidelines.

"And we're even better friends," said Northey, noting the two played softball together years ago.

"We go way back," added Clark. "We've had some nice battles over the years, but it's really fun to see (Sue) back."

Clark, originally from Cromwell, has brought her Hermantown squads to the Coaches Classic her entire tenure. She likes the locality, competition and scenery of squads. Tuesday, Solon Springs even sported a pair of 1,000-point scorers.

After their 22-point win, Clark was even able to attend a family birthday party being so close to home.

Speaking of perfect, the Esko boys kept their record unblemished this winter with an 85-45 hammering of Hinckley-Finlayson on Tuesday, one night after the team's 101-46 dismantling of Duluth Marshall.

Both landslide wins were in running time, as the perfect Eskomos (5-0) won the three-team Coaches Classic championship for yet another year. In fact, fifth-year Esko head coach Derek Anderson has never not won the tournament title.

Tuesday night, Anderson sported a Christmas sweater and shared plenty of smiles with his players as he watched his Eskomos barely break a sweat in capping a pair of wins by 95 total points in two days.

The 6-foot-1, 185-pound guard buried bucket after bucket, including 16 total field goals, six 3-pointers and was perfect at the free-throw line for a career-high 41 points.

"He was able to hit quite a few shots," said Anderson. "Everybody in that locker room, we always talk about it - we want to find the hot hand. (Cuinn) had the hot hand tonight and his teammates found him."

"I did it because of my teammates. We're a team, all the way through," he said. "We've got a lot of guys who can play anywhere." 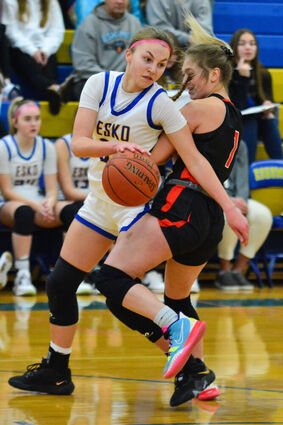 Esko's Cairin Berger spins around Cherry defender Mackenna Ridge in a 62-40 win for Esko Tuesday in the Coaches Classic tournament in Esko.

That's perhaps an understatement. In addition to their six double-digit scorers Monday, three more did so Tuesday - including Male and senior Carter Zezulka, scoring 13 and 12 points, respectively.

This all came without superstar Koi Perich, an uber-talented Division I football prospect, who is still recovering from a recent procedure.

"We have a lot of athletes and a lot of guys who can play," said Anderson. "We have a lot to clean up, but it's still early. We have some games circled on our calendar. Hopefully, we keep getting better every game."

Esko came up a game short of the state tournament a year ago, falling to Pequot Lakes in the Section 7AA championship. The loss is not forgotten.

"It's on our minds, for sure," said Anderson.

"It absolutely fuels us," added Berger. "We still haven't played a complete game yet. ... We're almost there."