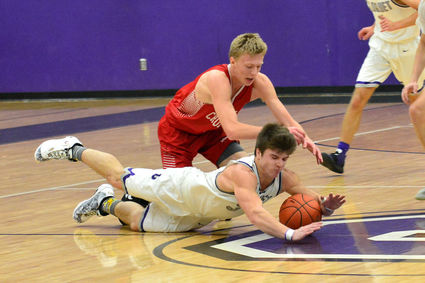 Cloquet's Markus Pokornowski gets to a loose ball first in front of Cromwell-Wright's Micah Pocernich during last Friday's Wood City Classic tournament in Cloquet. Cloquet won the opener but lost its second game to Pine City.

The Wood City Classic opened last Friday in Cloquet with some competitive play on both sides of the court for the boys and girls.

The Cloquet girls opened play with a loss to Mesabi East and were clipped by East Central in the second game.

The Lumberjacks led by one point (33-32) at halftime and then outscored the Cromwell-Wright by 11 points in the second half to secure the win, 69-57.

"Micah Pocernich is the real deal and a good player for Cromwell," said Cloquet coach Steve Battaglia. "We hadn't had a chance to scout them prior to the game, but after halftime we made some adjustments and felt there were some times where we could double up on him defensively and slow him down and that allowed us to tighten things up defensively."

The Cloquet duo of Markus Pokornowski and Adam Schneider led the 'Jacks with 22 and 20 points, respectively. The Lumberjacks also got an eight-point effort from Dylan Heehn and seven points from Tyler Issendorf. Rounding out the scoring for Cloquet were Damian Diver with five points, Alec Turnbull with four and Jordan Diver with three.

"We knew that we would have some matchup problems with Cloquet because they have some great athletes," Cards coach Bill Pocernich said. "We allowed Pokornowski too much penetration. He is such a great athlete that we had trouble keeping him from penetrating the paint which created problems for us."

Cromwell-Wright got a big night from Micah Pocernich who led all scorers with 25 points and by Ethan Shelton who poured in 17 points. Gage Zoeller was also in double-digit scoring for the Cards with 13 points and Taye Anderson chipped in with a pair of points for Cromwell-Wright.

Proctor had three players in double-figure scoring, led by the 21 points of Dylan Holm in their 55-46 victory over Pine City. The Rails held a slim one-point lead over the Dragons at halftime and then pulled away in the second half.

With four players in double figures, Cambridge-Isdanti proved to be too much for the Lumberjacks to overcome offensively in a game Cloquet trailed 37-14 at halftime. The final was 74-40.

"We are seeing improvements while taking some lumps and it's been frustrating," said Cloquet coach Heather Young. "I feel badly for our players, but I am hoping these frustrations will build stronger and better players in the end. We need to work on finishing a whole game and play two solid halves and put the ball in the hoop because that is an area we are struggling with."

Cloquet entered its second tournament game without post player Dylan Heehn, who was injured in the first-round game, and the 'Jacks struggled on the boards, allowing Pine City to win easily, 72-37.

"They blew us out and just hit everything from the field," said Steve Battaglia. "Against Proctor the day before they struggled and we shot well against Cromwell, then this game was just the opposite. We need to be more consistent."

"With Heehn out and then having Pokornowski in foul trouble, we just struggled on the boards," Battaglia said. "We just don't have a lot of size so we need to really work hard on that end of the floor."

Proctor kept C-W's Micah Pocernich in check for the first half, but the Cards got some big scoring in the opening stanza from Gage Zoeller - who finished with 22 points - to give Cromwell-Wright a 10-point halftime lead and eventual 60-57 win in overtime.

"We had good energy and got some nice offense from Gage and Ethan Shelton in that first half," coach Pocernich said. "They did a nice job on Micah in the first half, but then he came back and finished with a nice offensive night. Unfortunately we let them get back in the game on the defensive end of the floor in the second half as well."

The Rails outscored the Cards 33-23 in the second half to send the game to overtime, but the Cards had just enough gas in the tank to come away with a solid win.

"We love playing in the tournament because it really gives our guys a chance to face teams from bigger schools that are more physical," Pocernich said. "I really think this helps us when it comes to tournament time in March. This is our third year coming to this tournament and it is really good for us." 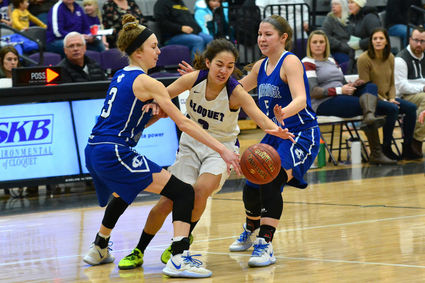 The Lumberjacks were unable to hold onto an eight-point halftime lead and fell to East Central 50-48 in the second game of the Wood City Classic.

Cloquet was led in the scoring department against the Eagles by Maddie Young, who finished with 15 points, and Gracie Meagher, who added 11 points.

Rounding out the scoring for Cloquet were Kate Owens with seven points, Justice Paro with six, Cristina Genita with five and four points for Katie Turner.

"I absolutely love that we can host this tournament," Coach Young said, adding that it takes a lot of organization. "I believe that the teams that came to the tournament this year all enjoyed it. We also had a lot of alumni home and in the gym with us. It is so neat to see the relationships between our current and former players and as a coach that means the world to me."