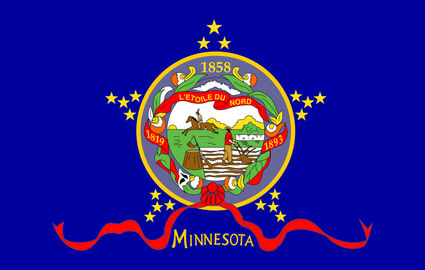 The Minnesota state flag has been altered three times since the first design was adopted on April 4, 1893. Amelia Center of Minneapolis entered the design contest that drew 200 entries. She won $15 when her flag was chosen.

1970 A former Greyhound bus station in Minneapolis opens its doors as a music club, the Depot. Twelve years later it would be renamed First Avenue by Steve McClellan, the booking agent for the club, and Jack Meyers, the club's financial manager. A cornerstone of the city's music scene, First Avenue has hosted local and national acts and was featured in Prince's movie "Purple Rain."

1893 The Minnesota state flag is adopted, just in time to grace a state-sponsored exhibit at the World's Fair in Chicago. Designed by Am...