Basketball league was a showcase of local talent 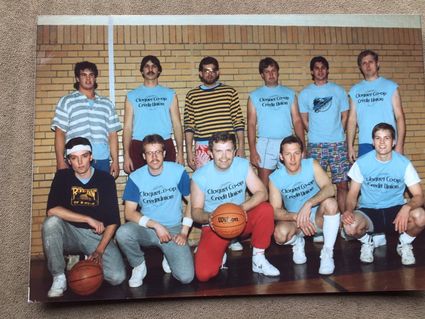 In the early 1970s, a bunch of us guys finishing up our high school days wanted to continue to play competitive basketball. We played nearly every evening after school at the Cloquet Civic Center.

Once in college, I talked to Kate Vestin, who was the center's manager, and told her I was interested in forming a team to play in a men's basketball league. I thought we could - although "undersized" - hold our own. Kate gave me league details and explained the need to find a sponsor. The sponsor's fee covered the cost of referees mainly, but also some miscellaneous costs. It was quite substantial.

Being broke college students, my friend Dave Boyer and I elected to look for a sponsor. I'd never done anything like this before, and actually practiced a speech. We went cold calling on Cloquet and Scanlon businesses. If I remember correctly, we unsuccessfully visited 23 of them.

We eventually called on Roger Johnson, a manager at the City National Bank on Cloquet Avenue. Johnson was an early morning golfer, so I recognized him because I cut greens during the summer at Cloquet Country Club. Nearly every day I'd see him and his buddies on the No. 5 green at about 6:30 a.m. I found out then how important it is to have an "in" when asking for a donation. City National agreed to sponsor us.

"Isn't there anything else?" he asked. "Don't you need uniforms?" Roger gave us a voucher to bring to the nearby Johnson Company and we ordered maroon and gold uniforms. We were signed up and set to play in the Civic Center league starting November 1972. The league ran from November to the March playoffs.

For the 1972-73 season, there were only four teams, the Hub Bar, Cloquet Transit, A&W and City National. The first game on our schedule was against Cloquet Transit, led by civic center legend Earl "the Pearl" Poferl. Transit also had two Cloquet Lumberjacks all-district players in Mick Hunter and Rick Franz, plus Dennis St. John and Tim Schroeder. City National Bank was composed of mostly 1971 and 1972 Cloquet graduates who were role players on the high school teams. Transit starters were four to 10 years older than my team players.

We won. Call it an upset.

City National won its second game handily as well over Bob Mostrom and the A&W team. We were riding high at 2-0 and facing the 2-0 Hub Bar team next.

It was a reality check. Hub trounced City National 101-61. Our big guy, Bill Bloomquist, was hurt, but it wouldn't have mattered. Hub had a talented team that had played together for years. It included Jack Hagen, Jerry Maunu, Steve Strand, Bob Benkoski, Craig Pollard and Daryl Niemi - all from Cloquet. Add to this mix John and Tom Grussendorf from Hermantown and big Harland Holte.

Hub won the league, losing just one game to Cloquet Transit. Hub qualified for the state tournament, picked up Hunter and Franz (rules allowed teams to add two players to the team roster), and won several games at state.

After completing a recent round of golf with my boys, I saw Jack Hagen out working in his yard. We chatted about the league. Hagen said he played until he was about 30. His teams won two Minnesota Recreation and Park Association state championships over the years. During the course of his career, Jack played with Lew Rickert (who played at Minnesota and the University of Minnesota Duluth and whose son played for the Timberwolves), Rockne Johnson (who played at UMD and is part of a famous basketball family), Dave and Dan Battaglia (Two Harbors and UMD), Mike Josephson (UMD all-conference player), Mike McDonald (of the legendary McDonald family from Chisholm), and Mike Axtell (Carlton and UMD). He emphasized what tremendous teammates the Grussendorfs were. We agreed on how tough it was to be an official during some rough games.

Talking to Jack reminded me that many of the players in the league were undoubtedly some of the finest players in northeastern Minnesota basketball history.

The league ebbed and flowed from a minimum of four teams, when I started, to nine teams and two divisions in the 1990s. The games switched to the old Cloquet Middle School gymnasium when the Civic Center closed. It was great changing to a gym with more than one scoreboard and a score clock that wasn't a big round circle like in the movie "Hoosiers." The middle school floor was of tremendous quality, and with the cafeteria underneath it, had some bounce. Cloquet Community Education organized and managed the league.

Really, it could have been called the Carlton County Men's Basketball League, as outstanding high school and college players from the entire region came to Cloquet to compete weekly.

I know I'm missing many, but these are some of the players, last names only, whom I had the privilege of playing with and against: Sunnarborg, Rahkola, Davidson, Lindquist, Bowman and Tollefson of Esko; Howe, Summers, Omar, Crandall and Kerttula of Carlton; Nyberg and Calcaterra of Cromwell; the Dammer brothers of Hermantown; Holte and Dubois of Moose Lake; Sinisalo, Enlund, Nordeen and Kollello of Brookston; Myhre, Mundell, Peterson and Neumann of Barnum; and Benson, Brenner, Yetka, DeFoe, Smith, Bakken, Meger, Stowell, Stahl, Miller, Diver, Korman, Welton, Stevens, Pastika, Nelson, Joyce, Franz, Randa and four Johnsons of Cloquet.

The referees deserve thanks for putting up with players griping, as do the long-standing sponsors, including Members Cooperative Credit Union, Cloquet Transit, the Museum (now Carmen's), the Rendezvous and several other drinking establishments frequented by players after the games. And of course, kindest regards to the league's 17 loyal fans. 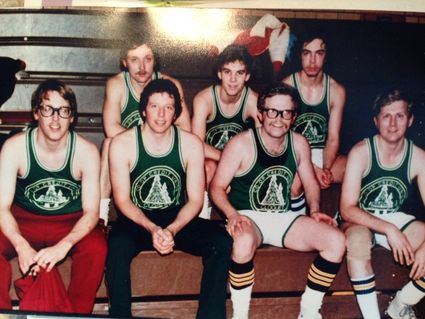 I played in the Cloquet men's basketball league for a total of 23 years. We won the league title twice under the sponsor Energy Inc., a petroleum distributor. Most other seasons, we were a .500 team. Energy teammates included Matt Gornick, Greg Lennartson, Keith Johnson, Jeff Hallback and Harland Holte.

The last year I played was last year of the league, 1994-95. I remember Dale Schroeder saying: "Well, Korbs, at least we can say we played when we were 40. Not many can."

I could no longer run fast, jump high, or play defense. But that hadn't changed much from that first year in 1972.

Steve Korby's interest in writing goes back to when he was in fourth grade and editor of the Scan-Satellite school newspaper in Scanlon. He welcomes human interest stories and tales regarding Carlton County residents, sports, projects, history, and plans.