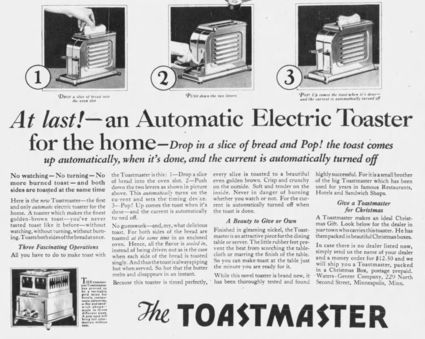 The first ads for "The Toastmaster" appeared in late 1926. The pop-up toaster was invented in Minnesota by a man tired of being offered burned toast at his workplace cafeteria.

1916 James J. Hill, the "Empire Builder," dies in St. Paul. A man of enormous influence, he moved to St. Paul in 1856 from his native Ontario, began work in the shipping business, and became owner of the Great Northern Railway and Northern Pacific Railroad companies. His interests were widespread: he helped develop the Iron Range, had a fleet of ships on the Pacific Ocean, pushed for modern farming techniques in the Northwest, and helped float the bonds that supported the democracies of Europe agains...