A line of pines were toppled at Elim Lutheran Church and its cemetery.

A sloppy kiss between a moist, unstable air mass and a veering cold front led to a stormy afternoon and evening last Friday, Aug. 14, across Carlton County. Strong downdraft winds snapped trees and unrooted others. Power lines went down, causing outages, particularly in the Carlton area and south although there were also lines down in Thomson Township. In the western part of the county, near Wright and Cromwell, low-level tornadoes were suspected but unconfirmed by the National Weather Service. A tornado warning had been issued for the area in the early evening until 7:30 p.m.

It was all part of a strong line of storms that hit Minnesota from its western midsection all the way up to the Iron Range, where there was flooding from heavy rain. The weather service reported this week that there were 13 confirmed tornadoes that sprouted from the line, including one just west of Carlton County near Lawler, rated an EF-1 with winds up to 90 mph. Pine Knot News photographer Amber Nichols said a bartender got a video of the tornado touching down and lifting back up near Amos Fredrickson's place there, which has many downed trees and some damage to buildings. Fredrickson told Nichols he was in the garage when the storm hit, and estimated the winds were close to 100 mph.

Outbuildings were damaged in the Kettle River and Moose Lake areas and to the east.

"We had storms blow up pretty quickly," said meteorologist Josh Sandstrom from the Duluth office of the National Weather Service. He said there were "all kinds of ingredients" that led to the heavy rain, winds and tornadoes.

It all moved on quickly, with many county residents soon enjoying an orange glow sunset after the worst of the storm was over, including rainbows and a crazy quilt of cloud formations.

Many residents and businesses were without power after the storm, some for a few hours, others for more than a day. Cloquet's Laura Perttula said she lost power for 19 hours at her home on West Cloquet Avenue while other parts of the city were entirely unaffected.

And then there was the Encore Performing Arts Center, where actors followed the creed that "the show must go on."

The theater was in the middle of its first indoor performance since the pandemic began when the lights began to flicker. Then the power went out completely about two-thirds of the way through the first act.

Manager Joel Soukkala made the call to take an early intermission, then, armed with flashlights and cell phone lights, they restarted the show with nearly all the audience members sticking around.

"If a pandemic ain't gonna stop us, no little power outage will," Soukkala exclaimed theatrically, adding that they also had a small portable generator that could run one floodlight and the computer with portable speakers. Only three audience members choose to leave and return for a future performance with lights.

Soukkala said power was restored at the theater after midnight Friday and there was no lasting damage, just another good story to tell. Power at his home in Blackhoof Township, east of Barnum, didn't return until around 4 a.m. Sunday.

Just down the road from Soukkala's house, Elim Lutheran Cemetery lost more than 10 trees, most of them large pines that toppled in a straight line along the cemetery border.

Damage from the storm depended on where an upper-level trough of hot and humid air met with the cold front. The Carlton County map where the weather service tracks storm damage was dotted with reports of damage.

The Scotts Corner area west of Wrenshall and around Chub and Hay lakes had numerous reports of large swaths of trees down along with power lines, including Nick Selin's property a mile south of Hay Lake where they lost numerous trees, some of them landing on the garage and outbuildings on the property.

The weather service was still processing what exactly happened in that part of the county but Sandstrom suspects straight-line winds as most trees fell in the same direction. A tornado produces a swirl of downed trees and a contained damage area, Sandstrom said. 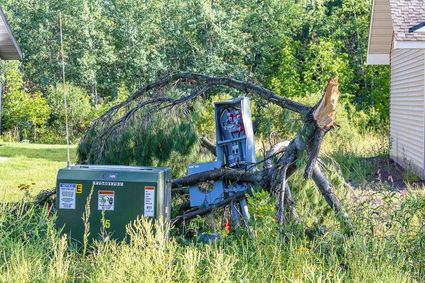 The weather service "can't rule out" that some of the activity in the county was tornadic, Sandstrom said. Tornadoes in northern Minnesota are "more common than people think," he said, but often go undetected with the large swaths of lands that are uninhabited. "It just happens in areas where no one sees it."

Carlton County ranks 86th out Minnesota's 87 counties for confirmed tornadoes, just ahead of Cook County along the North Shore. From 1950 to 2014, according to weather service records, there were just six confirmed tornadoes reported in Carlton.

The strong storm season is winding down for northern Minnesota, Sandstrom said. It generally runs from July to mid-August. After the brief but fierce storm, the area has been met with clear skies, low humidity and temperatures in the 70s. There were a few scattered storms, but nothing like that messy kiss witnessed a week ago.