'Justice for Jackie' heard at courthouse

Friends, family remember murder victims and hope for a conviction

It's been six months since a pregnant Jackie DeFoe and her 20-month-old son, Kevin, were found dead in their Cloquet home - DeFoe stabbed multiple times and the toddler dead from blunt force trauma.

On Tuesday afternoon, a crowd of nearly 50 people gathered outside the Carlton County Courthouse, to make sure officials are taking the case seriously and to ensure the alleged killer doesn't go free.

Despite the fact that the prosecution - County Attorney Lauri Ketola's office and the Minnesota Attorney General's office - filed documents this summer stating that they would seek a harsher sentence in the case, the crowd outside the courthouse was concerned.

"Sheldon was all smiles at his last court hearing," said "Justice for Jackie" organizer Taysha Martineau. Martineau also leads the Gitchigumi Scouts, a grassroots organization on the Fond du Lac Reservation that patrols and seeks missing and murdered indigenous women (MMIW) and engages in harm reduction practices to reduce those numbers, according to their Facebook page. They were there, Martineau told the crowd, to remind people that Jackie DeFoe was not just a hashtag or a reason to march. "We're here to demand justice."

In response to the Pine Knot, Ketola said she was not the county attorney when Thompson was charged with any previous crimes, and could not provide insight into previous decisions.

"I can assure aggressive prosecution of those who physically or sexually abuse others, particularly children, is my highest priority," Ketola said.

According to the complaint and prior police press releases:

Fond du Lac police officers responded to a call for service Saturday, March 7, around 1 p.m. from a reporting party who said they had spoken with Thompson the previous day, and that he was acting unusual. When asked what was the matter, Thompson allegedly told the caller that he had killed DeFoe, making a gesture that indicated strangulation. He also allegedly told the caller he had killed her son.

After police received a search warrant to enter the home later Saturday, they found DeFoe in a closet with stab wounds to her body and one across the front of her neck. They found her son's body in another bedroom, with observable bruising around the head. According to the criminal complaint, Thompson allegedly told numerous people that he had killed DeFoe and her child. Attempts to locate Thompson, who had lived there intermittently, were initially unsuccessful. Police got a tip that he was in a vehicle with someone, but when they contacted the person, she said she had dropped him off on the side of the road. Later Thompson called 911 and indicated that he wanted to turn himself in, giving them an address. When police arrived, he wasn't there.

With the assistance of a Minnesota State Patrol helicopter and a K-9 from the Carlton County Sheriff's Office, he was located in a wooded area off Mission Road in Perch Lake Township and taken into custody Sunday evening, March 8.

Shortly after Thompson was arrested, the coronavirus pandemic arrived in Minnesota and the courts system slowed considerably, moving to online hearings and no in-person trials. Thompson's case file shows months of "e-service" filings, including removal of both Carlton County judges Rebekka Stumme and Robert Macaulay - Sixth District Judge Jill Eichenwald is now hearing the case - along with other correspondence and discovery disclosure requests.

On July 29, Ketola and assistant Minnesota attorney general Erin Elridge filed a notice to the court that they intended to seek an aggravated sentence upon conviction, asking for an upward departure from Minnesota sentencing guidelines. They outlined seven factors for the request, including the "particular vulnerability" of the victims and the "particular cruelty" evidenced by the fact that Defoe was stabbed 35 times in the back, and her child had multiple fractures, bleeding on the brain and was left to die.

Other factors in the decision to pursue aggravated sentencing included the planning, preparation and concealment of the bodies; abuse of a position of authority; and that Thompson is a repeat and dangerous offender, used a dangerous weapon and allegedly killed multiple victims. The filing cited previous case law for each aggravating factor.

Ten days after the filing for aggravated sentencing, Thompson's attorney Kassius Benson filed to have all charges dismissed, pleading innocent of all charges and demanding a contested omnibus hearing on the issue of probable cause.

Specifically, Benson wrote that the state's case is based on witness statements that claim Thompson said he killed Jackie and her son, and lacks eyewitnesses, a murder weapon or relevant physical or forensic evidence linking Thompson to the crime. The motion also argued that the state lacked a motive for Thompson, who had allegedly convinced Defoe not to seek an abortion after she found out she was pregnant with his son.

"Importantly, evidence exists that another person had motive to commit the murders charged in this case," the motion to dismiss stated. Defense demanded an in-person evidentiary (omnibus) hearing.

Ketola told the Pine Knot News that both parties were required to file omnibus issues by Sept. 4. A contested omnibus hearing is now scheduled for 1:30 p.m. Oct. 28.

A history of violence

A look at Sheldon Thompson's criminal history reveals a half-dozen incidents that included assault and domestic assault charges over a 14-year period.

-In December 2006, at the age of 19, Thompson was charged with attempted second-degree murder and second-degree assault with a dangerous weapon, as well as fourth-degree damage to property. In a plea bargain, Thompson pleaded guilty to the assault charges and the other charges were dismissed.

-In November of 2015, Thompson was charged with fifth-degree gross misdemeanor assault and criminal damage to property in the third degree. He pleaded guilty to the assault and the other charge was dismissed.

-In Wisconsin in May of 2016 Thompson was charged with second-degree charge of recklessly endangering safety along with battery/domestic abuse and disorderly conduct/domestic abuse. In that case, Thompson pleaded guilty to the first charge, and the other charges were dismissed.

-Back in Carlton County, Thompson faced new charges of third-degree assault and felony domestic assault filed in December 2016. He pleaded guilty to the third-degree charge, and the other charge was dismissed.

-In January of 2017, Thompson was charged with violating a domestic abuse no-contact order in Carlton County Court, a felony. He was sentenced to two years in prison, but the sentence was stayed for three years.

When she was murdered, Jackie DeFoe joined a long list of Native American women who have been victims of violence. A 2016 National Institute of Justice report revealed that four in five American Indian (and Alaskan Native) women have experienced violence in their lifetime, and more than half have experienced physical violence by intimate partners.

Before they marched around the courthouse, the Gitchigumi Scouts leader wrapped a blanket around Jackie's mother, Tammy Suomi, explaining that it is customary to do that for someone who is grieving. When people gather and eat and grieve together, they call back the spirits, she said. They also gifted Suomi with a ribbon skirt.

After more words of support - including offering to come to future legal hearings - and burning sage, the group of about 50 walked around three sides of the courthouse, led by a MMIW flag and a veterans Eagle Staff, to the beat of the Cedar Creek drummers.

After the march, Jackie's mother shared her feelings with a number of press and television journalists covering the event. She wishes the legal case were over she said, because she worries that Thompson might "get away with what he did."

But she said it was good to be there at the courthouse.

"I don't feel alone," she said. "I know she was loved and cared for by others and they all miss her." 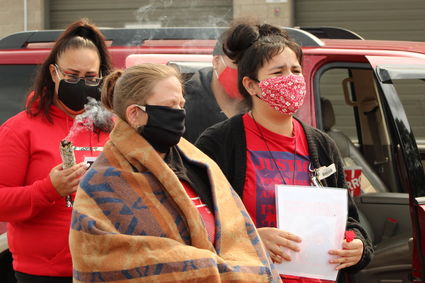 "Justice for Jackie" organizer Taysha Martineau stands with Jackie DeFoe's mother, Tammy Suomi, after wrapping her in a blanket, an Ojibwe tradition for those who are grieving, she said.

After they walked, some of the crowd shared memories of Jackie. A lifelong friend, Aubrey Lundquist, said she misses Jackie's contagious laugh, and their emotional times together, good and bad. "I miss our laughter, stories, supporting each other in hard times," Lundquist said. "She's forever in my heart."

Veteran and Fond du Lac elder Fran White pointed out that Thompson had been charged (but not convicted) with second-degree murder before.

"It's time to stop giving a slap on the hand," she said, sharing a summary of his felony convictions with the crowd.

Others encouraged those who are victims of domestic violence to speak out, assuring them that they aren't at fault, and their abusers usually know how to manipulate them and others into thinking that. "We'll kick down the doors for you, but we can't do nothing if you don't speak out," a Gitchigumi Scout member said.

"When a woman speaks out, we need to make it a shout," Martineau said.

Others tried to start a chant: "Not one more," they said, referring to the numbers of MMIW. "Justice for Jackie," came the refrain.