Lumberjacks get a historic win 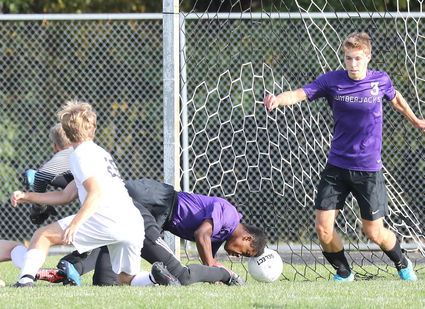 Cloquet-Esko-Carlton's Elijah Aultman uses his head to score the Lumberjacks' goal in their 1-0 shutout of Duluth East on Bromberg Field Thursday night. CEC had never beaten East before.

7Notice is hereby served that the Cloquet-Esko-Carlton boys soccer team is now 6-0 on the season following two impressive wins last week. On Thursday the Lumberjacks beat Duluth East for the first time in school history. On Saturday afternoon they knocked off always tough Grand Rapids 3-1.

At home Thursday against Duluth East the wind swirled and created problems for both teams at times, but the 'Jacks showed patience, and then got a little bit of luck, when normally sure-handed East net minder Eli Kramer mishandled a corner kick by Tyler Issendorf. Cloquet freshman Elijah Aultman was able to out-battle a pair of Greyhound defenders and headed the ball into the net from the ground at the 33-minute mark giving the 'Jacks the lead.

"The goal happened on a corner kick that was taken by Tyler Issendorf and he couldn't have placed it in a better spot," said CEC coach Dave Bergan. "There was a bit of a scrum as we had players going up for the ball as well as East defenders and their goalie. It was just out of reach for the goalie and we were able to capitalize on it. We are not the tallest team on the pitch, but as we work on set plays I always tell the boys that when there is a scrum in the box you need to get anything on the ball: a head, knee, hip, foot, something to push it towards the goal."

(Editor's note: A video of the goal posted on the Pine Knot News Facebook page shows Aultman using his head on the ball almost like a seal.)

Both CEC and East were undefeated going into the match, but the scrappy 'Jacks had just enough fortitude to take the win as they clamped down on the Greyhounds defensively.

"Defensively we played a great game," said Bergan. "We made some mistakes but those mistakes were made in the right part of the field where there was no threat to score. The back line of Tyler Issendorf, Michael Kayser, Henry Slater and Nate Bong played the best game I have seen from them. They understood what needed to happen and they executed."

By picking up their first win ever in boys soccer against Duluth East, the Lumberjacks should be brimming with confidence. 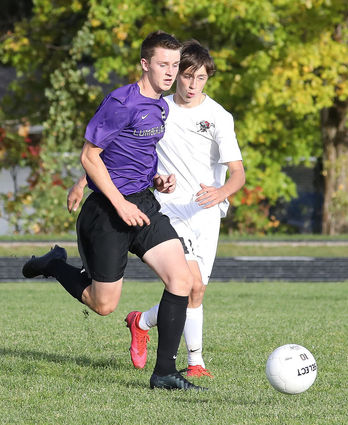 Spencer Rousseau beats Duluth East's Grady Downs to the ball during the second half.

"This has been a goal of this group since they were just starting out on JV. The game only solidified that the hard work that they have put in day after day proved that they are right where they are supposed to be," Bergan said. "They now know that together they can achieve their goals for the season. Right from the first day of practice we have focused on playing our game and not adapting to the other team but making the other team adapt to us. The boys did exactly that during the game. They played CEC soccer and East needed to adapt to our style of play which in return halted the big offense that East usually has."

On Saturday the 'Jacks kept the ball rolling by downing the Grand Rapids Thunderhawks 3-1 with goals coming from Elijah Aultman, Jordan Aultman (find video of that goal on Facebook too) and Drake Schramm.

The back-to-back wins and another win Tuesday over Superior improved the 'Jacks to 7-0 on the season. They play their next home game against a talented Denfeld team at 4:45 p.m. Tuesday, Sept. 29. Fans not on the list to get inside can watch games from outside the fences at Bromberg Field.