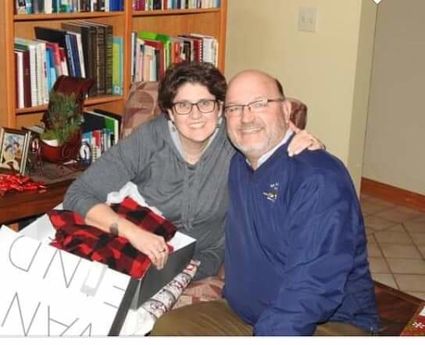 Pastor Jeff Walther and his wife Christina are battling Covid-19.

News that Jeff Walther, pastor at Esko's St. Matthews Lutheran Church, had tested positive for the coronavirus spread pretty quickly, in part because his daughter lives in my house with her husband, and in part because Esko is a small town. I can now say I know someone with Covid-19. I wish I didn't.

It's been terrible. Pastor Jeff is a pretty popular guy around Esko. In a community where many people look out for each other, the outpouring of support has been impressive. Normal and natural for Esko, I suppose, but still impressive. And for people of faith, it's heartwarming to see members of all three major church congregations in town showing their support for Pastor Jeff and his family. (His wife, Christina, and his son both have the virus.)

But the disease has seriously affected Pastor Jeff's health. He and I are about the same age. Neither one of us is as young and healthy as we used to be. And none of us are as invincible as we once thought we were. Since this pandemic hit, I've been far more careful with hygiene, and I wear my mask when appropriate. But it never really occurred to me that I was in all that much danger.

Pastor Jeff is on a ventilator. You know, the kind of medical machine everyone was talking about last March when this mysterious disease first started to affect us all. I only vaguely knew what a "ventilator" did, thinking it was like those little oxygen masks you see some people use while shopping at Walmart. Well, ventilators are a lot more unpleasant than that. Essentially, there's a tube stuck down your throat to help you breath. You can't eat or talk while hooked up to a ventilator. It's a big deal. You've been "intubated."

He's been on the ventilator for a week now, and is expected to need one for about three weeks. He spends 16 hours a day on his stomach, then they turn him over for eight hours on his back. Obviously, he's in the intensive care unit. His family is told that he can't speak or feel pain, as he's heavily sedated. But he can hear, and has responded when the nurses ask him if he's scared. I won't tell you how he responded.

No one knows how Pastor Jeff got infected. It's not fair that such a good guy is so sick with Covid. But life isn't fair, I'm told, and this virus is serious - it doesn't discriminate among whom it infects, as it floats around on water vapor transmitting itself from person to person, affecting some worse than others. There's no way to know how someone will react to the infection.

My roommate (as I call her; she's actually my daughter-in-law) shared this message at her church's last Zoom call: "Just before Dad got sick, I was having a rough day. He called and left me a voicemail saying, 'Hey Hannah, I just wanted to wish you the Lord's blessings. I also just wanted to let you know that there's always the X factor, which is the God factor. No matter how difficult or challenging it may be, if God wants it to happen, it'll happen. So keep praying to him and pray that everything turns out all right.'

Odds of catching Covid go way down when people follow basic guidelines. Most of us aren't careful enough, and it's about time we try harder. I wouldn't wish this disease on anyone. Please, wear your mask. Sanitize. Stay socially distant. Be safe. I don't want to know that anyone else gets this disease.

Pete Radosevich is the publisher of the Pine Knot News community newspaper and an attorney in Esko who hosts the talk show Harry's Gang on CAT-7. His opinions are his own.Reach him at [email protected]