Harry's Gang: Seasons change, and so do roles at radio station 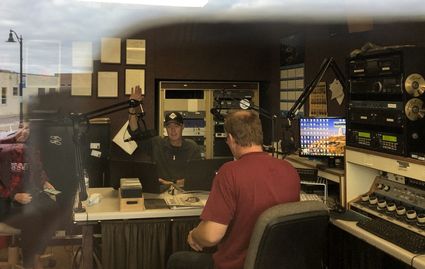 Kerry Rodd waves from the other side of the window at the WKLK radio station in downtown Cloquet, during a recent morning show with Jake Kachinske (also pictured)

Local radio will never quite be the same after today. Kerry Rodd, who has been at WKLK Radio for about 14 years now, is retiring Friday. Well, retiring from radio, that is. He's planning to work at a local car dealership, using his media experience to promote the business as well as sell cars. He's been the general manager at WKLK for the past eight years, a job I really don't understand. How can you run a radio station while hosting a three-hour show every weekday morning and programs on Saturday mornings? Running a radio station must be pretty easy, because performing 20 hours a week on-air is a lot of work. Where did he find the time to actually run the station?

And he writes up sports stories for this newspaper as well.

Radio is a great medium, because, as Steve Cannon, the legendary WCCO afternoon guy used to say, "Radio is the theater of the mind." You are listening, maybe half-listening, maybe intently, and you are imagining what is being said. If the host delivers the message correctly, you have an image in your head that is probably completely different than the image in my head. That's the magic of radio.

I've been listening to WKLK since I got to town in 1999. I remember the first time I met Jake Kachinski, who has been Kerry Rodd's morning partner since 2007. Jake looks nothing like he sounds. I was not expecting a young, svelte handsome man, and I wasn't disappointed. Even today, when I occasionally sit in on the Friday morning show (when Jana Peterson, the editor and boss here at the newspaper, is busy) I marvel how Jake's voice simply does not match his body. He's got some great pipes, though, and hopefully he will stay at the station and get a new partner. The show must go on, I'm told.

There's lots of changes this fall, which is inevitable. Fall is the season of change, and things don't really stay the same for very long, anyway. People come, people go. But I'll miss the consistent reliability of the "A Squad" morning show on WKLK. I didn't listen every morning, and certainly not for the entire three hours. But there has been a feeling of security knowing I can turn on the radio and there would be Jake and Kerry, yukking it up, chatting about the news, boring me with sports talk. Kerry seemed to know just about everyone in town. I guess that comes from being Scanlon born and bred. Local radio is supposed to be local, and Kerry knew who to call in just about every circumstance.

We've grown accustomed to high-quality radio here in our small town. Jake and Kerry made it seem natural, normal, like you were listening in to a couple of friends at the breakfast diner. Not to say the show didn't have hiccups, some dead air, and more than one joke that fell flat. But even those seemed part of the show. I'm going to miss that.

Kerry has been at WKLK since the winter of 1976 - yes, 44 years ago. He "took a break" in 1983 to host the "Daily Express" at KDAL, which ran for 22 years and was the highest rated talk show in Duluth. He'd had a few other gigs, too, and called college hockey for many years before returning to Cloquet. I knew he'd have to retire eventually, and hopefully Jake will carry on, but it just won't be the same.

I suppose no one is irreplaceable, but this one is gonna be tough.

Pete Radosevich is the publisher of the Pine Knot News community newspaper and an attorney in Esko who will host the talk show Harry's Gang on CAT-7 again soon. He can be reached at [email protected]