First section game is an 11-0 breeze for CEC 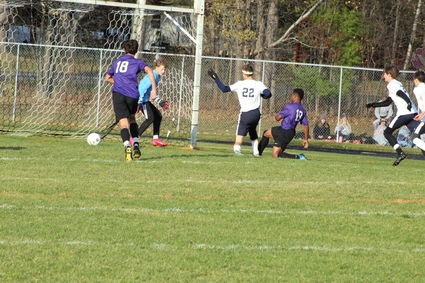 CEC freshman forward Elijah Aultman (far right) scores one of his five goals in Tuesday's playoff game against Hibbing, while teammate Paddy Genereau is there in case there's a rebound.

The Cloquet-Esko-Carlton boys soccer team wrapped up an undefeated regular season last Thursday with a 4-0 shutout win over the Proctor Rails, followed by an 11-0 win over Hibbing at home on Tuesday night in the opening round of the Section 7A playoffs.

In the Lumberjacks' Tuesday night home playoff win, Joe Baker gave CEC a 1-0 lead just 30 seconds into the game. The score stayed that way until the 18-minute mark, when Drake Schramm scored the first of his two goals of the game on a penalty kick. After the goal by Schramm, CEC coach Dave Bergan subbed in brothers Elijah and Jordan Aultman and the results were almost immediate with Elijah Aultman scoring five straight goals in a 16-minute span. That put the 'Jacks up 7-0 lead at halftime.

"We started out quick and stayed disciplined throughout the game," said Bergan. "Elijah is just tenacious and he was just really hungry for a goal and he kept at it. He's quick and he is able to just finish."

Two minutes into the second half, the Lumberjacks picked up a goal from Paddy Genereau and four minutes later it was Schramm scoring his second goal of the contest giving CEC a 9-0 lead.

"I wasn't worried about any type of letdown coming into the game, because it's all about preparation and we've been building up to this moment throughout the season," Bergan said.

Sam Bailey and Grant Werhan both added late goals for the 'Jacks in a second half that saw a lot of the regular starters on the bench.

In last week's regular season win over the Rails, the Lumberjacks had four different players score. Not only did they go undefeated in the regular season, but they also won the Lake Superior Conference by going 7-0.

Following their playoff win on Tuesday night the Lumberjacks improved to 12-0 on the season.

The Lumberjacks will face No. 8 seed Denfeld - who beat Hermantown Tuesday to advance - in the next round of the playoffs. Cloquet beat Denfeld 11-0 the last time they met, but the Hunters' top scorer, senior Keegan Chastey, injured his ankle in that game and didn't play the second half along with at least one other Denfeld senior, Xavier Decker.

As things stand right now, there will be no state soccer tournament for boys or girls, as the Minnesota State High School League voted to end the fall seasons with section championship games as part of a health and safety plan during the COVID-19 pandemic.

Depending on what site you visit, the CEC boys team is ranked No. 5 in the state by minnesota-scores.net and No. 7 by mnsoccerhub.com. Esko senior Drake Schramm is tied for first in the state for assists and seventh in the state for goals, with 21. Cloquet freshman Elijah Aultman is in 10th place for goals with 20 after his five-goal game Tuesday.