South Ridge stays on top at 3-0 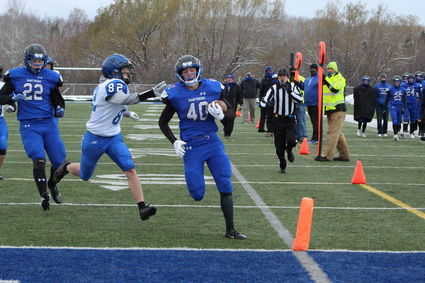 Panthers senior Tyler Anderson looked like he scored a touchdown during Friday's game against McGregor, but it didn't count because of a penalty on the Panthers during the play.

A big win Friday for the South Ridge football team has set up a head-to-head meeting with another undefeated foe this week.

"It will truly be a big test for us this week against 3-0 Cherry," said Panther head coach Brent Johnson.

A quick start on Friday gave the Panthers a 20-0 halftime lead and then the defense did the rest by keeping the Vikings off the scoreboard until late.

"I was very pleased with the way our defense played," said Johnson. "We held Cook County to just six points which they scored late in the fourth quarter and those are the only points our starting defense has allowed so far this season." 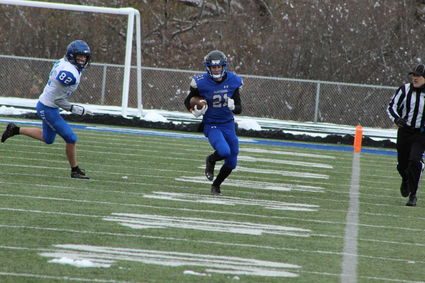 The defense - which has been impressive all season - was led by Deekon Anvid and Wyatt Olson. Both finished with eight tackles, including two tackles for loss. Anvid also had a sack in the game and is leading the Panthers in tackles on the season.

Leading the offense were Connor Bushbaum and Weston Stroschein. Bushbaum had another big game with one rushing touchdown to go along with 221 rushing yards. Stroschein scored twice in the game , one rushing and one on a catch.

The Panthers were the Section 5 nine-man champions last year. Despite the loss of seven seniors, they haven't lost a step.