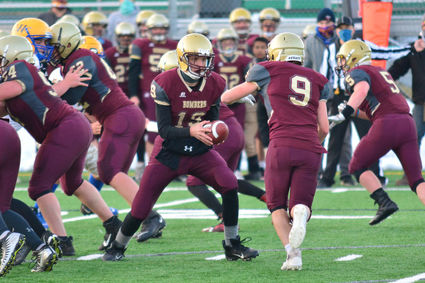 Barnum quarterback Hayden Charboneau readies a handoff for Willie Richardson in a game earlier this season.

The Barnum football team rallied hard in the second half of Tuesday night's playoff game vs. Braham, but a 24-8 halftime deficit proved to be too much to overcome as the Bombers were beaten 24-16 and bounced from the Section 7A football playoffs.

Braham - also nicknamed the Bombers - scored on its first possession of the game on a 27-yard pass play and took an 8-0 lead, but Barnum answered on their very next drive when Reed Kornovich scored on a 25-yard touchdown gallop, tying the game at 8-8 following the conversion run.

quarter touchdowns on runs of 27 and 22 yards as they built a 24-8 edge entering the break.

Barnum's defense stiffened in the second half and continually stopped the Braham offense. The Barnum Bombers were finally rewarded late in the third quarter when Willie Richardson scored on a 9-yard touchdown run, cutting the lead to just 24-16 after the two-point conversion.

With 2:12 left in the game, the Bombers faced a fourth down situation from deep inside their own territory, but were unable to pick up the first down, and that was just enough for Braham to run out the clock.

Barnum's Richardson finished with a game-high 124 yards rushing as the Bombers ended the season with a record of 2-4.