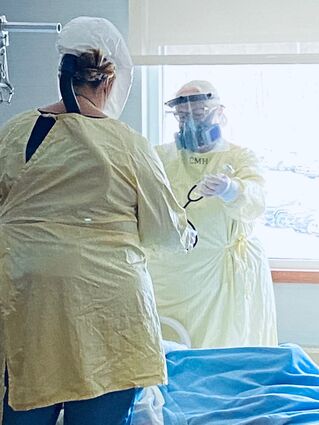 When the most recent surge of Covid-19 infections hit Carlton County in a big way, the staff at Community Memorial Hospital in Cloquet had to handle their own surge in patients.

"I've heard people describe it as a mass casualty event that just keeps happening," Breuer said. "I mean, we prepare for those kind of things as sudden, acute things, not as an ongoing event. We've turned a lot of corners and seen a lot of ebb and flow, but it's straining a lot of folks."

It doesn't only "feel like" CMH has been busy either. Data released by the federal government earlier this week along with a Covid-19 hospitalization tracking project by the Carlson School of Management shows that the Cloquet hospital has, in fact, been very busy.

Breuer said the report confirmed what he already suspected: that CMH has been treating Covid patients at a level mostly seen at larger hospitals.

"I didn't find another rural hospital with compatible numbers," he said. "We have been able to accommodate more patients than other rural hospitals and I give all the credit in the world to our staff for that. If we didn't have the staff, we couldn't do it. If people are coming here and they need to be admitted, we have been able to admit them if we can care for them, if their needs can be met by us."

The data focused on how many beds are filled with Covid-19 patients, per hospital and per county. The ratio of COVID-19 hospitalizations to total beds gives a picture of how much strain a hospital is under. Though there's not a clear threshold, when that rate rises above 10 percent it's a concern, according to a story by National Public Radio. Over 20 percent represents extreme stress, and near 50 percent means the hospital is "overloaded," NPR reporters wrote, citing a metric developed by the Institute for Health Metrics and Evaluation at the University of Washington.

At its worst, CMH had two-thirds of its available beds filled by Covid patients, Breuer said.

He explained that the hospital usually has about 22 beds available for patients (plus three in the birthing suites), and normally about 10 of those are full. Since the surge, they've frequently had more than 20 beds full, or double the normal operations.

But they were ready for the surge, after developing a response plan this spring and getting extra licenses, extra beds and extra equipment so they could treat more people than the hospital typically does.

"We've largely shut down our surgeries so we can use nurses from there, and we've got house supervisors doing bedside nursing," Breuer said. "We're pulling people wherever we can. Extra providers, the family docs from Raiter are coming over and helping our hospitalists round on the patients. Wherever we said we need more from you with the inpatient side just busting at the seams, people have really stepped up."

Again, operating at much higher than normal capacity has put a lot of strain on staffing, especially because community spread was so high and some staff members had to quarantine so they couldn't work for stretches of time. They planned for that, but it's still not easy.

Additionally, they've diverted very few patients to larger hospitals in the region, which have also been filling up since the local surge started in October.

"We all understand Covid very well at this point, we have the people and the equipment and the training and the drugs and all the tools we need to treat the typical Covid patient," Breuer said. "So it's been fairly uncommon that we've had to shift Covid patients because of care."

Thankfully, over the past several days, the hospital has seen the Covid "census numbers" drop. That's a relief not only because of the ongoing strain, but also because they were worried that people would gather on Thanksgiving and cause another spike and that hasn't happened (yet).

On Wednesday, Gov. Tim Walz said the recent improvements haven't been significant enough for Minnesota to let down its guard.

"We went from really horrendous to just horrendous," Walz said.

CMH is still quite full, but now there are more patients hospitalized for other types of treatment. Breuer said it's a repeat of what happened earlier this year, when people delayed treatment or visiting the doctor for care out of worry, then ended up in the emergency room as other problems became more severe. "I've been saying all along, please, see your doctor and keep your clinic appointments," he said. "The clinics are safe environments, and take care of your small medical issues before they can become big medical issues."

News that the vaccines are arriving as soon as this week has given everyone at the hospital and the adjacent nursing home, Sunnyside Health Care Center, a lot of hope, Breuer said, adding that he thought the doses for Cloquet were in the state already on Wednesday, and he expected them to be delivered to the hub in Hibbing by Friday.

They expect to begin vaccinating staff at CMH and Sunnyside, plus first responders for Cloquet, Carlton and Cromwell next week with the Pfizer-BioNTech vaccine that received emergency approval from the Federal Food and Drug Administration; they are scheduled to receive a new batch of vaccines each week until everyone has received their two doses. Residents at Sunnyside will be vaccinated when the second vaccine, produced by Moderna begins arriving.

"We have a lot of staff very excited about it," Breuer said. "I think it truly is going to help us get to an endgame much, much faster. You can question certain actions the state or federal governments have taken in response to Covid, but I will forever be thankful for this rapid vaccine development because I think it's going to help our community, our state, the country and truly the whole world."

The Cloquet hospital is also registered to be a community vaccination site, so as soon as vaccines are available for the general public, they will begin that process as well.

Breuer said the order of vaccinations was determined by state and federal officials.

If three times in a row is a trend, most of Carlton County is trending downward for Covid-19 cases.

Although they are still significantly higher than in the spring, the state reported fewer new positive Covid cases in Carlton County for the third week in a row. From Wednesday, Dec. 9, to Wednesday, Dec. 16, the county saw an increase of 172 new cases, and eight new deaths. That's a decrease compared to the previous week (Dec. 2-9), when there were 224 new cases and 21 deaths, and Nov. 25-Dec. 2 , when there were 327 new cases.

The total cumulative Covid cases in the county was exactly 2,400 as of Wednesday, Dec. 9. Deaths attributed to Covid-19 in the county are now at 29 since the pandemic reached the county in March.

The state's Dec. 10 report by zip code showed most Carlton County cities with a decline in new cases. At 1,043 cases, Cloquet crossed the 1,000 mark for cumulative cases, with an increase of 97 cases, versus 121 the previous week. Carlton saw an increase of 26 cases to 221, after 55 new cases the week before. Esko increased to 304 cases, a jump of 21 cases in a week. Moose Lake was up to 304 cases, a jump of 59 since the week before and a rise in new cases. Barnum showed 149 cases, an increase of 10. Cromwell went up to 69 cases, up by 13 from the week before - the most new cases in a week since the pandemic arrived in the Northland. Wrenshall and Kettle River each report 31 cumulative cases (up by three), with Holyoke at 29 (plus four) and Sawyer holding steady at eight cumulative cases for the fifth week in a row.

In terms of number of positive test results, Carlton County has a cumulative rate of 5.8 percent: that's the average rate of positive cases per 10,000 people since testing began this spring. However, a snapshot of recent testing and percent of positive cases from Nov. 22-28 put the county at an 9.1 percent positive rate, up from 8.2 from 13.10 percent positivity rate the week before. In May, the World Health Organization recommended that the percent positive should remain below 5 percent for at least two weeks before governments consider reopening.

On Dec. 10, a 63-year old man from the Moose Lake prison died at Abbott Northwestern Hospital in Minneapolis after being diagnosed with Covid-19.

The same day, a prisoner in Faribault also died from Covid.

“This has been a difficult day for the Department of Corrections,” said Commissioner Paul Schnell. “We extend our deepest sympathies to the families and friends of these men. We continue to do everything in our power to mitigate and contain the spread of Covid in our facilities.”

These are the seventh and eighth Covid-related deaths of incarcerated people in the Minnesota DOC system since the pandemic began. It is the fourth death at the Faribault prison and the first at the Moose Lake facility.

Also in Moose Lake but at a different state facilitiy, the Minnesota Sex Offender Program reported its second Covid-related death on Dec. 9, following the first on Dec. 2.

Three other incarcerated people were in critical condition and receiving ventilator treatment at outside hospitals. Several DOC staff members were also hospitalized due to Covid.

Nearly 740 civilly committed clients receive treatment at MSOP facilities in Moose Lake and St. Peter. There are 20 active cases of Covid-19 among clients in MSOP facilities.