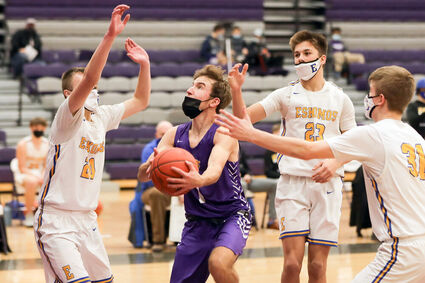 Cloquet's Tyler Issendorf goes through three Esko defenders for a first-half basket during Monday's game at Cloquet Middle School. Esko ended up running away with the game.

"We were patient on offense early on in the game, which opened up a lot of shots," Anderson said. "We have been playing in too much of a hurry lately, so it was nice to get back on track and work the ball around."

Working the ball around paid off and the Eskomos sprinted out to a 32-18 halftime lead. They were never threatened as they rolled to a 31-point win.

While Esko worked the ball around with patience and purpose, the Lumberjacks struggled to find any rhythm in the game.

"They shot the ball extremely well and played with poise and we turned it over, didn't play much defense, and showed no patience offensively," said Cloquet coach Steve Battaglia. "The turnovers were out of control. The turnovers started early, and it was contagious."

On the other end of the court, the Eskomos game plan also paid off in the turnover department - as the poise and control seemed to also help them avoid the turnover bug that hurt the 'Jacks.

"We took care of the ball on the offensive end and were patient, and that allowed us to get back and set up our defense," said Anderson. "Being patient on offense allowed us to conserve some energy for the defensive side of the court. It was nice to see the team be patient and not force shots. We took care of the basketball and played to our potential. We were happy to get the win."

The Eskomos were led in the scoring department by Eli Blue with 22 points, Cuinn Berger with 15 points and Jonah Randa with 13. Also scoring for Esko were Cade Berger (9), Mason Perich (7), Brett Lilo (4), Dalton Spindler (3), Nick Swanson (3) and unknown (2).

"It was a very disappointing night," said Battaglia. "We had come off of a good win at Superior on Friday night and just simply laid an egg against Esko. Credit Esko though, they were good defensively and extremely good shooting the ball."

In Superior on Friday night the Lumberjacks won a thrilling 65-64 double-overtime game on a buzzer-beating 3-point shot that sent the team home with an impressive road win.

"Superior was our best game of the year," said Battaglia. "We played well, defended well and we played with patience offensively." 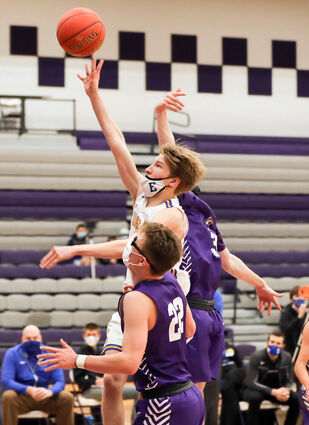 Esko's Jonah Randa shoots between two Cloquet defenders. He was one of three Eskomos to score in double digits.

Adam Schneider led the Lumberjacks to the win, not only by scoring a team-high 22 points, but also by hitting the game-winning shot. Sorenson and Alec Turnbull also were in double-digit scoring with 11 and 10 points respectively.

Next, the Lumberjacks travel to Proctor Friday for a 7:15 p.m. game, while the Eskomos play at home against Barnum starting at 7:15 p.m.

There is no general admission for high school sports according to state guidelines. Those not on the player list for games are encouraged to livestream the games online. The Esko vs. Barnum game will be broadcast on 96.5 FM.