Vaccination pace is slow and steady 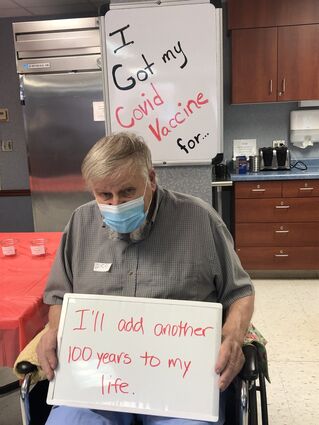 Joe Burbul at Sunnyside Health Care Center in Cloquet holds a sign relaying his thoughts on getting vaccinated earlier this month. According to CMH CEO Rick Breuer, 70 percent of Sunnyside staff and 97 percent of the nursing home residents had been vaccinated by earlier this week. Sunnyside has seen no new infections among residents or staff in more than a month, he said.

As the vaccination process for Covid-19 ramps up in Minnesota, getting a vaccine has almost become a sport for some - as they bounce between various drugstore chain websites, local health care clinics and hospitals and a state waiting list that closes and opens as supplies ebb and flow.

If you're registered on three different lists and end up getting vaccinated earlier somewhere else, that's OK, says Community Memorial Hospital CEO Rick Breuer. Just make sure you share that information with CMH staff when they call.

"We have found it to be most efficient to reach out to the patients themselves and ask about this when we are setting up their vaccination appointment, rather than first check each patient against the state vaccination database.

Carlton County residents are doing pretty well with vaccinations compared to other counties in the region, according to Dave Lee, the county's public health and human services director. Last week Lee said 16 percent of the Carlton County population is now covered with the first shot - ahead of any other county in the region but Cook County.

Things are going well at the Cloquet hospital, which began vaccinating first responders and health care workers in December, and started vaccinating the general public - ages 65 and older - on Feb. 5.

Breuer said as of last Friday, Feb. 12, CMH staff had administered 1,951 doses of the Pfizer vaccine. Another 500-plus doses were scheduled for this week. Breuer said CMH has vaccinations scheduled multiple days each week. The exact days and times of the week vary depending on the allocation each week of first and second doses.

"I'm sure every state official and vaccination provider wishes there were more doses available. But every dose we are receiving is being administered as quickly as possible," he said. "The governor has asked providers to administer 90 percent of first doses within three days of receipt and 100 percent within seven days of receipt. We are administering every first dose within three days. We have more than adequate storage to safely handle the doses we are receiving."

Cloquet resident Rosa Johnson, who moved to the U.S. from Italy in 1976, was incredibly thrilled to get her first vaccination at CMH last week and told the Pine Knot News she hopes her family members in Italy will get the vaccine soon.

"I am so grateful for the American scientists who provided us with the lifesaving vaccine. Thank you, America," said Johnson, who is looking forward to going back to work at her Silver Rose Fashions formal wear shop.

It takes time for the vaccine to kick in. Breuer said optimal immunity from the vaccination won't be present until two to three weeks after the final dose, although some protection begins as soon as one week after the initial dose.

"But for all currently approved vaccines requiring multiple doses, it is considered essential to receive the second dose at the recommended time interval after the first to receive optimal benefits," he said.

According to data updated by the state on Wednesday, Feb. 17, a total of 7,104 people in Carlton County have received at least one vaccine dose - an increase of 1,065 over the past week - out of nearly 36,000 residents. According to the same report, 2,409 Carlton County residents had completed the vaccine series of two shots as of Feb. 17.

Carlton County Covid-19 case numbers increased by only 19 cases over the past week, and there have been no new deaths in at least three weeks.

As of Wednesday, Feb. 17, Carlton County had seen a cumulative total of 2,965 Covid-19 cases with 43 deaths, according to the most recent numbers from the Minnesota Department of Health. Also Wednesday, the Fond du Lac Band of Lake Superior Chippewa reported a total of 196 positive tests so far with 92 of those on the reservation; both numbers haven't increased in at least three weeks.

The state's Feb. 11 report by zip code showed most Carlton County zip codes with few new cases. There were zero new cases in Cromwell, Wrenshall, Sawyer and Holyoke. Kettle River and Moose Lake increased by one new case, Barnum by two. Carlton increased by three cases and Esko by five. Cloquet reported 19 new cases for a total cumulative of 1,364. 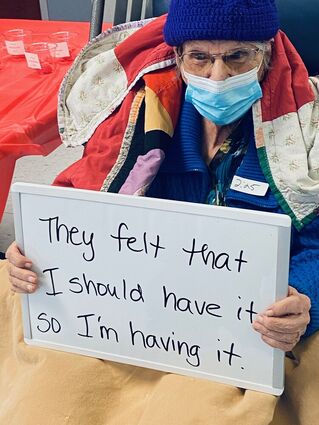 Margaret Colberg holds up a sign telling why she got her Covid-19 vaccination at Sunnyside Health Care Center in Cloquet, where most residents were vaccinated Thursday. Staff at long-term care facilities got vaccinated first, followed by residents, according to the state plan.

For the first time in months, there were zero Carlton County facilities on the state's list of senior living facilities that have or had Covid-19 exposure in the last 28 days.

"We are still seeing some patients with Covid, but just as concerning now are the individuals suffering more medically complex situations because they are staying away from health care facilities," Breuer said. "We saw this earlier in the pandemic as well, and I remain worried about people delaying necessary medical care out of fear."