Cloquet track team off to the races 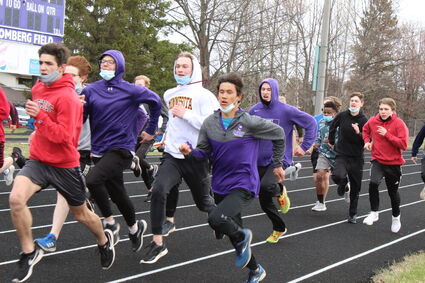 Although Tuesday's Cloquet track meet was canceled due to cold weather, track practice continued, just with added layers of clothing. A group of hurdlers race around the track early in the practice here.

After a one-year hiatus, the Cloquet boys and girls track teams finally got back on track (literally) last week when they participated in the North Central Quadrangular meet in Cambridge Thursday. Both teams showed they are a force, with the girls taking first and the boys team finishing second.

"I was just happy to get the team out there and give them a track meet," said Cloquet coach Tim Prosen, who had to postpone Cloquet's first two home meets because of the weather. "Overall, we had a solid meet."

The Lumberjacks took first place in the shot put with Bella Harriman winning the girls event and Will Turnbull capturing first in the boys event. Cody Tibbetts added a third-place finish for the boys and Seija Suominen was fourth for the girls.

Suominen also nabbed first place in the girls discus with Emily Vermeersch taking third and Harriman fifth, while Tibbetts was fourth on the boys' side.

"Abi had a great meet for us, and I think she surprised herself with her success," Prosen said.

Nathan Genereau continued the success for the Cloquet hurdles by winning the boys 300-meter hurdles, with Nathan Blatchford also having a nice race by finishing fourth.

"Coach Tim Anderson has done a really good job developing hurdlers, and Nate Genereau is an example of that," Prosen said. "Nate had a really nice time this early in the season for this event, and it was a great race, as he and the Cambridge athlete fought really hard to win this race. Nate Blatchford has also really evolved into a solid athlete in our program, and I expect to see his name in the paper plenty throughout this season."

Perhaps the most impressive race for the boys team was in the 3200-meter run where they took the top four slots - led by Miles Fisher, who won with a time of 10:41.21. Jacob Maertz was second, Josh Sanders third and Ben Bauer finished fourth.

"Our distance runners are strong, and this is great evidence of it," Prosen said. "They had so much fun out there running, as these guys work very hard all week and stick in a pack and take these spots. Coach Arne Maijala, Ed Martin, Harry Cottrell and Issac Boedigheimer really do a great job working with these athletes. It is great to see the trust of the athletes on the coaches, the athletes know if they work hard the results will follow."

Meanwhile, in the boy's triple jump Cloquet went 3-4 with Logan Dushkin and Genereau. In the 400-meter boys run, Nate Bong was fourth, with Dushkin fifth. On the girls' side it was Alexa Shepherd finishing fourth.

"Coach Michelle Wick and coach Dale Flankey do a great job and will get the jumpers where they need to be, they always do a great job," Prosen said.

Another impressive feat for the girls team was their strength in the sprints. In the 100-meter dash it was Kaley Will and Katelyn Kelley finishing second and third, respectively. In the 200, Katie Turner and Lydia Stone finished fourth and fifth, respectively. On the boys' side, Dylan Heehn and Miigwan Tanner-Wostrel finished fourth and fifth. In the boys 100-meter dash Alex Peterson was fifth.

Sam Buytaert had a strong run in the boys 800-meters by finishing second. In the girls race, Charlotte Ripp placed third and Amelia Allen finished third.

"It was good to see both teams get out and win this race, as again the competition was good," Prosen said. "They have had such minimal handoff practice, but they overall hit the handoffs pretty well."