'Jacks come out on top in high-scoring affair 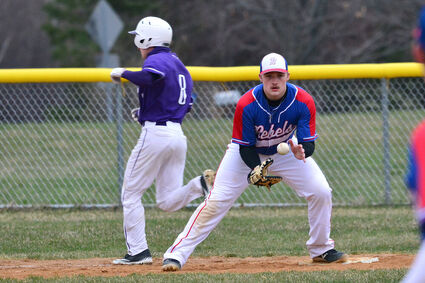 Cloquet's Grant Werhan beats the ball to first base as the Rebels' Ethan Burton is ready to make the catch.

The hitting shoes were on for two local baseball teams on Friday, but the Lumberjacks had just a little more punch in their lineup as they downed the Rebels 19-11.

"There was a lot of offense by both teams," said Cloquet coach Tyler Olin. "Any day both teams have 10-plus hits, the bats are hot! It was a nice job at the plate for both teams."

Moose Lake/Willow River edged ahead 3-0 in the first inning, but Cloquet bounced back with three runs in the top of the second. Again the Rebels gained the lead with another run in the bottom of the second, but the Lumberjacks exploded in the third and fourth innings when they scored seven and six runs, respectively.

"Marshall Hayes had a good game at the plate by going 3 for 4 for us with a double and five RBI," said Olin.

Cloquet wasn't the only team hitting the ball on Friday. The Rebels also scored 11 runs and pounded out 10 hits.

"Both teams did a good job being patient at the plate, and pitches that were in the zone were hit hard around the field," said Rebels coach Spencer Clough. "Cloquet made a lot of good contact against our pitchers; they constantly put pressure on our defense to make plays."

The Lumberjacks led the game 16-7 entering the bottom of the sixth inning, but the hometown Rebels showed their backbone by scoring four runs and cutting the lead to 16-11.

"The Rebels put the ball in play and made us work," said Olin. "A couple errors for us cost us, but it's early in the season. I think pitching and defense will clean itself up as the season goes on and kids get sharp." 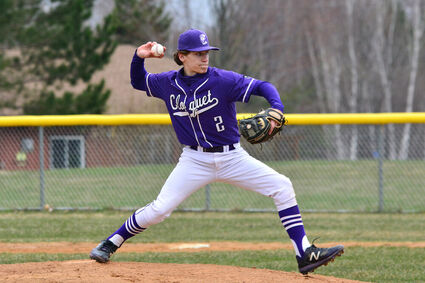 Senior Carsen Psyck pitches Friday afternoon against the Rebels in a high-scoring affair in Moose Lake that ended with Cloquet winning 19-11.

The Lumberjacks answered the Rebels with three runs of their own in the top of the seventh to go ahead 19-11. and that would be the final score.

"Unfortunately, our defense wasn't as sharp as it needed to be," said Clough. "I have liked our approach at the plate by being aggressive on pitches that we can drive and the execution to be able to hit line drives when swinging. Our offense continued to give us chances to get back in the game."

Cloquet improved to 3-0 with the win while the Rebels fell to 1-4 on the season.

Cloquet's next home game is a doubleheader against Denfeld starting at 4:30 p.m. Tuesday.