Rebels down Bombers in hard-fought battle 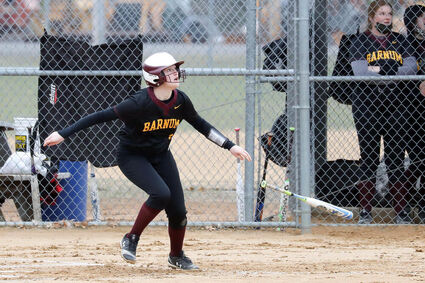 The Moose Lake/Willow River Rebels relied on the strong pitching arm of sophomore pitcher Alex Hoffman last Tuesday as they pulled away to a 6-2 victory over the Barnum Bombers in Willow River.

"Tuesday's game against Barnum was actually one of our better-weather games," said ML/WR coach Kelly Goeb. "Our field was a little damp in the pitcher's circle and around home plate, but it was still very playable. Luckily, the field is on sand so it dries quickly."

Both Hoffman and Barnum pitcher Mendota Castonguay pitched well, so both teams had to earn their runs in the game. Hoffman gave up just five hits and two earned runs while striking out 11 Barnum batters and picked up the win.

"Pitching is obviously a key part of the game," Goeb said. "We are fortunate to have Sarah Christy and Alexis Hoffmann, both 10th graders that are willing to work hard for us in the circle. They have both had games of striking out more than 10 players already this year, so we are excited to see what the future holds."

For her part, Castonguay gave up six earned runs and kept the Bombers in the hunt throughout the game.

"Mendota has been pitching since seventh grade for us," said Bomber coach Dusty Collelo. "Her biggest strength is her ability to hit the spot that we call from the bench. She threw only 88 pitches against Moose Lake, which is not unusual for her."

Ironically, Castonguay spends much of her summer playing with the Rebels players in summer leagues.

"We are fortunate to know Mendota, as she has played with many of our ML/WR girls in the summer," said Goeb. "She's a great pitcher, and we have enjoyed having her on our summer team. I think our girls have seen her pitch enough through the years that they feel comfortable in the box hitting against her which likely helped with our offense."

At the plate, the Rebels were able to knock out 12 hits against Castonguay and the Bombers. Natalie Mikrot, Hallie Klavu, Sarah Cristy, Sandra Ribich and Janna Bode all finished with a pair of hits. Mikrot, Christy and Ribich all doubled in the game.

"I thought Hoffman did a good job of attacking the strike zone and unfortunately for us we just didn't put the ball in play enough," Collelo said. "We struck out too often." 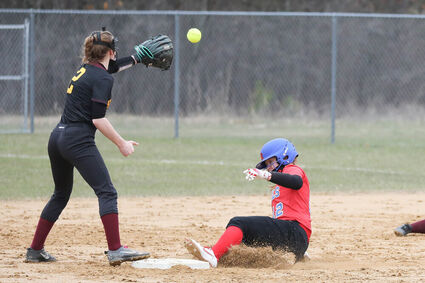 Moose Lake/Willow River's Natalie Mikrot slides in safe at second base before Barnum's Kaitlyn Buell can make the play during the teams' April 27 softball game in Willow River.

A big key to the game was a five-run first inning for the Rebels aided by some errors by the Barnum defense.

"We have a pretty solid defense overall," Collelo said. "Unfortunately against Moose Lake/Willow River we came out and gave them some extra outs in their five-run first inning and that proved to be costly."

Barnum's top two hitters this season have been Castonguay and Lacie O'Leary. On Tuesday they both pounded out a pair of hits with O'Leary adding a two-run homer and Castonguay a double.

"As a team our offense has been lagging so far this season," Collelo said. "We had a two-week pause before we could get any games in, so we are working on getting our timing down as quickly as we can. Lacie O'Leary and Mendota Castonguay have been on fire with each hitting .750 with multiple extra- base hits each."