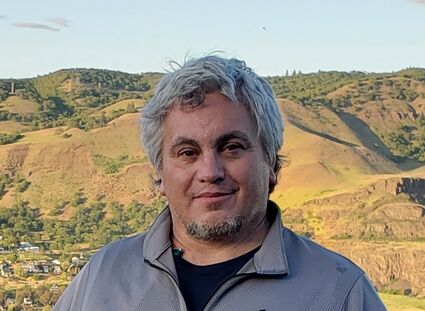 Bimbo Nordrum, 51, left this world on an Indian Motorcycle in Sherman County, Oregon, May 5, 2021. Born April 6, 1970, to James and Judy Nordrum, he grew up in International Falls with his sister, Jo, until the family moved to Cloquet in June 1987, where he graduated from high school. He went on to serve in the U.S. Navy 1989 through 1993.

After being honorably discharged, he followed his father into the ironworkers trade with the Ironworkers Local 512 and worked for many years throughout Minnesota and Wisconsin.

Bimbo was fiercely loyal and dedicated to family and friends. He enjoyed many things in life, but his true passion was motorcycles.

He was preceded in death by his father, Jim Sr. He is survived by his wife, Jennifer Wagner; mother, Judy; sister, Jo; brother, Justan; his son Wyatt; stepchildren Tim, Zach and Angelica Wagner; his niece, Tiyana; many aunts, uncles and cousins; and his lifelong friend and brother in crime, Eddy Morff.