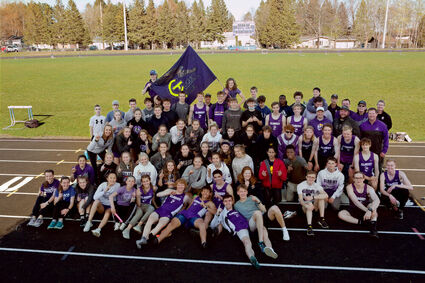 On the girls side the Lumberjack had 216 points, Grand Rapids was second with 135 points followed by Proctor, Hermantown, Superior, Duluth Denfeld and Duluth Marshall.

"Olivia Jameson is one of the top track athletes in the area, she is so versatile," head coach Tim Prosen said. "Her efforts in these events piles up so many team points, I hope to model more athletes after her in how she approaches this sport."

"Our throwers quietly add so many team points," Prosen said. "They are such a fun group to work with. No group laughs more at practice, but yet they work so hard."

Kaley Will was first in the 100-meter dash and Alexa Snesrud won the 200-meters. Katie Turner also took top honors in the long jump.

Benson, who finished third in the 100-meter hurdles, also added a second in the pole vault, while Cloquet also got third-place finishes from triple jumper Taylor Wick and in the 800-meter run from Caley Kruse.

"Heehn has really stepped up this year. He is a force out there," Prosen said. "Reese Sheldon is really strong this year, but that was the first time he marked a long jump all year. Due to injury early on we could never get some good work on it, we took a gamble putting him in there but we knew that he could hit a great jump and win it, and so he did. Luckily we bring him back for two more years."

"Genereau runs so hard, it is so fun to watch him compete," Prosen said. "We are hoping to see him challenge our school record in the 300 hurdles."

Logan Dushkin was a first in the 800-meter run for Cloquet while Jacob Mertz won the 3200 meter run. Miles Fisher finished second in the 1600 and third in the 3200.

Lance Konietzko was third in the discus.

In the relays, the Cloquet boys were just as impressive by taking first in the 4x100 with the team of Miigwan Tanner-Wostrel, Alex Peterson, Heehn and Sheldon. The 4x400 team of Nate Bong, Genereau, Cale Prosen and Dushkin also took first. The 4x200 team of Blatchford, Peterson, Tanner-Wostrel and Genereau finished second as did the 4x800 team of Ben Bauer, AJ Maijala, Prosen and Sam Buytaert.