Glints of glory at state meet 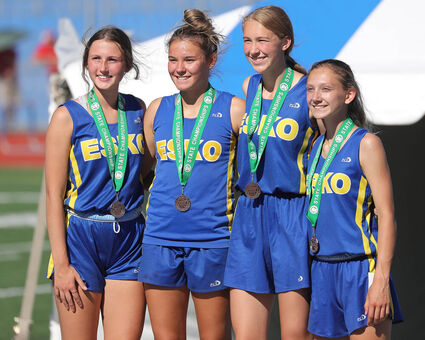 The Esko 4x100 meter relay team poses on the podium after a fifth-place finish at Friday's Class A state meet at St. Michael-Albertville High School. The team of Allison Thornton, Gwen Lilly, Kaitlyn McConnell and Emily Rengo won the first heat of the day.

Last week's Minnesota State Class A boys and girls track meet yielded a few surprises in the weight events for both boys and girls, two of those by area athletes.

In the boys discus event, Esko's

Gage Stankiewicz was a heavy favorite to take the title, but notice was served by South Ridge's Deekon Anvid in sectionals. Anvid narrowly missed beating Stankiewicz, who had recorded the longest throws in the state this season. In the state meet, Stewartville's Will Tschetter and Anvid both surprised, with Tschetter taking top honors on a throw of 175 feet, 7 inches, and Anvid placing second with a toss of 168 feet, 7 inches - by far his best throw of the season.

"I expected Deekon to be near the top in the state for sure," said South Ridge coach Jeremy Polson. "We knew with his training and a taper he would be near the top. He went from 125 feet to the personal best and school record of 168-7 and had an amazing year."

Leo Silha of Plainview-Elgin- Millville was third at state and Stankiewicz was fourth with a solid toss of 164 feet, 4 inches. Stankiewicz won the state title as a sophomore, and this season was the only prep athlete in the state to throw over 185 feet.

"Gage has been very consistent all year. I know every thrower is looking for the perfect throw at State, so I am sure that Gage was hoping for that too," said Esko boys coach Gary Beaudot. "Matt Peterson and Bill Hudspith do such a great job with our throw athletes, so I never worry about them. Gage understands what makes a great throw, and I am sure that he knew it didn't happen in either one. He placed third in the shot and fourth in the disc. Both throws were good, but short of his best on the season. By the end of the day he was all smiles, knowing that he had an incredible season. His growth from his freshman to senior year was incredible."

In the shot put both Tony Nelson of Tracy-Milroy-Balaton and Silha had personal bests to finish 1-2, while Stankiewicz finished third with a toss of 51 feet, 2.5 inches.

On the girls side, the surprise of the day was Esko's Zoie Johnson, who finished third in both the discus and the shot put. Johnson, who participated in both softball and track this spring, finished one place ahead of South Ridge's Elle Ridge in the discus with a throw of 118 feet, 5 inches - 11 inches better than Ridge.

"Zoie saved her best for last," said Esko girls coach Matt Peterson. "Zoie had an amazing career before the state track meet even started. She is a six-time Polar League all-conference performer. She had just missed the state track meet as a sophomore and she did all of that while being a standout on the Esko girls softball team at the same time.

Well, Friday she smashed potential, she rose to the moment and showed all of us how good she is and placed third in both shot put and discus. I am so proud of Zoie - she spent most of the season in the shadows of fellow senior Gage Stankiewicz and his amazing performances, and at the end of the day she took the opportunity given to her and shined."

Moose Lake/Willow River's Skyla Thompson had a PR in the pole vault by going 9 feet, 6 inches.

"Breaking her own school record on the way to a ninth-place finish was Skyla Thompson," said Rebels coach Noah Jurek, adding that Skyla will continue her track and field career at Northwestern College next year.

In the girls relay events, Esko's 4x100-meter relay ran an impressive time of 50.79. It broke the school record and was good enough to give the Eskomos a fifth-place finish. The South Ridge 4x400 team ran a 4:19.20 for a 13th-place finish.

On the boys side, Moose Lake/Willow River had three relay teams in the state tournament. The Rebels 4x100 team took ninth in a school-record time of 44.88 and were closely followed by the South Ridge Panthers team, which ran a time of 45.26 for 11th place.

"The boy's 4x100m relay team was the best finish of the day for us on the boys side," Jurek said. "Some changes were made after the section meet to space out Kaden Robbin's races as well as put a faster 4x100m relay together. That plan changed one more time after Grant Pettit came down with a hamstring injury during the 4x200-meter relay. Jaxsyn Schmidt, a relay member from the section meet a week prior, was thrust back into action. Jackson Thompson, Carter Johnson, Jaxsyn Schmidt, and Kaden Robbins were unfazed by the late changes and ran to a ninth-place finish with a time of 44.88. That time broke the school record set the week before of 45.18."

South Ridge hurdler Tony Cummins had a strong race in the 300 hurdles, finishing in a time of 42.51 and in 10th place.

The Rebels Carter Johnson had a leap of 19 feet, 10.5 inches and grabbed an 11th-place finish in the long jump.

"That was impressive, considering this was only his fourth time competing in the event," said Jurek.

In the high jump, Carter Zezulka of Esko jumped 6 feet even, which ensured him a ninth-place finish. Jackson Thompson of ML/WR went 12 feet in the pole vault, which was enough to take 10th place. 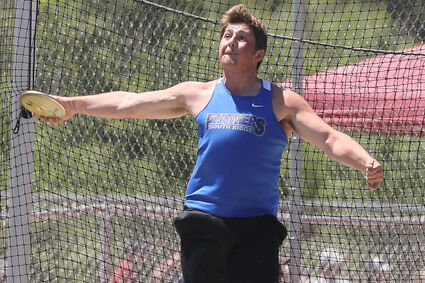 South Ridge's Deekon Anvid throws the discus during Friday's Class A state meet. Anvid finished second with a distance of 168-07.

Cromwell-Wright sophomore Noah Foster battled injuries all season, but still had enough ability and gas in the tank to finish with a time of 9:48.50. That was PR for Foster, and that gave him an eighth-place finish in a highly competitive race.

"Noah dealt with a bit of hip injury most of the season and he was only able to run one race a meet for May and June," said Cromwell-Wright coach Dave Foster, who is also Noah's father. "I was very pleased with the toughness he showed through the injury. "He was able to PR despite having to limit his workouts. Noah is a very driven athlete. With two years left to compete, I see him continuing to strive to qualify for state meets (cross country and track) and attempting to break some longtime school records in the distance races. Noah made me an extremely proud father."