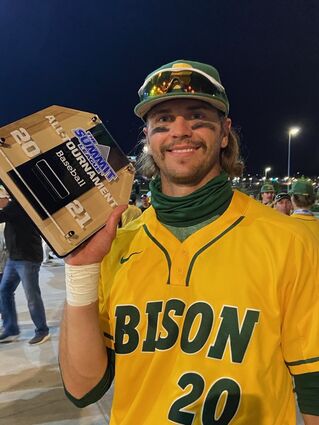 North Dakota State University won the Summit League championship and an automatic bid into the NCAA tournament. Esko's Nick Emanuel was named to the All-Tournament team.

Nick Emanuel graduated from Esko High School in 2016. Five years later he concluded a stellar career at North Dakota State University, and just a couple of weeks ago he signed a professional baseball contract.

Emanuel signed with the Great Falls Voyagers of the Pioneer league in Montana. The Pioneer League is considered an advanced rookie league. Until a year ago, the Voyagers were the rookie team of the Chicago White Sox, but because of Covid the team was cut from the White Sox farm system and is now in the independent league affiliated with Major League Baseball.

Emanuel and four other Bison players returned for a fifth year, granted because of a shortened and missed season in 2020 - again due to Covid. This year's Bison squad shattered the school win-loss record by going 42-19 and qualified for the NCAA Division I baseball tournament.

"My final college season was everything I could have ever dreamed of," Emanuel said. "It still hasn't sunk in yet as to how special it was."

The 2021 Bison won the Summit League championship. With that came an automatic bid into the NCAA tournament. Emanuel was also named to the All-Tournament team for his performance in the tournament.

"The All-Tournament accolade was pretty cool, but I'm so proud of every one of my teammates," Emanuel said. "We all turned it up when the postseason hit."

Following the championship, the Bison moved on to the NCAA regionals in Palo Alto, California. NDSU opened with a 9-1 loss to a powerful Stanford Cardinals team, but followed that up with the first NCAA DI playoff win in school history when they downed Nevada before being eliminated by UC Irvine on Sunday. The squad flew back to North Dakota on Monday. Shortly thereafter, Emanuel got a text from the Voyagers offering him a professional baseball contract.

"I actually got the text as we were landing coming back from Stanford," Emanuel said. "I was still processing all the accomplishments that our team had at NDSU, so it didn't really hit me until I signed the contract that I was going to be playing professionally."

The text set off a whirlwind couple of days in which Emanuel had to pack up and join his new team.

"I was unbelievably excited and it's hard to put into words," Emanuel said. "Just hugging my parents and girlfriend who have been such an unreal support system was special. I shed a few tears. I am continuing to get texts from around the Northland and it really goes to show how proud I am to represent not only myself, but where I come from."

In the college game nearly everything is scripted for an athlete. They know when they have class, when they have practice, when they will eat meals and when the games will be. In professional baseball, an athlete is expected to be a professional and take care of their personal lives while also getting paid to perform on the field. 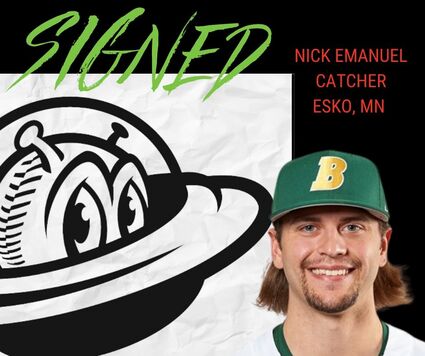 He recently signed with the Great Falls Voyagers of the Pioneer league in Montana. The league is considered an advanced rookie league.

"Professional baseball is very different from college," Emanuel said. "It's all about how good you want to be, there's not someone telling you what to do and where to be, so it was key for me to develop my own routine right away, and I found one that works for me."

Now that Emanuel has the first step out of the way - signing a professional contract - he can focus on getting better and better and moving up the ranks from rookie league baseball and maybe, just maybe, get a chance somewhere down the road to make a big league roster.

"The hardest battle is going to be staying healthy, but I'm confident that I can continue on the right path of getting stronger and more durable," Emanuel said. "As far as how the future plays out, well, I'm just going to enjoy every day and try to get 1 percent better every day."

With a group of solid supporters behind him, Emanuel can be sure he will have plenty of people following his journey every step of the way.