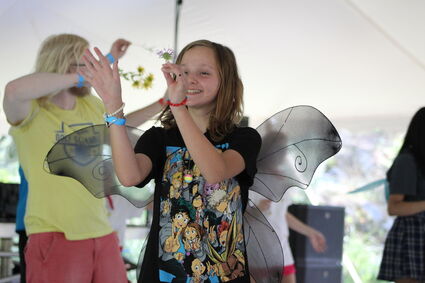 Things were buzzing at the Honey Bee Festival Friday, in a mellow laid back kind of way. Icon Man husband-and-wife duo Mothy and Diane Soden-Groves played for an audience in lawn chairs from the porch of the Oldenburg House, while other activities, events and commerce spread out across the grounds of the 125-year-old historic home.

It was all about the bees, with honey-infused food and drink and bee-inspired arts and crafts, along with information galore to support pollinators, and plenty of bee costumes.

Dressed in black and gold, aerialist Suzy Q set up on the other side of the fountain and pool, while not far away plein air painter John Grandorvitz worked on a watercolor painting of the scene laid out before him. 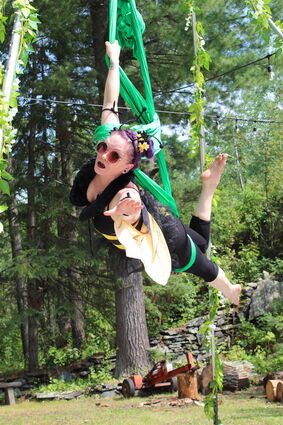 Soon enough, the Bee Friendly Arts campers and their REACH advisors would take to the stage under the big tent to perform "the waggle dance" followed by a song with the acapella group Minor Mischief. Comprised of UMD vocal jazz grads who are now based in the Twin Cities, the group worked with the campers in the morning on Friday before performing at the festival in the afternoon.

Musical groups continued to entertain throughout the evening, with shows alternating between the porch and the big tent. There was more to come on Saturday, with music from noon to 10 p.m., a mermaid at the pool, and plenty of focus on the stars of the show: honey bees.

Henry Oldenburg, one of the first American conservationists and the man who decided to build the home that bears his name next to Jay Cooke Park, would have been proud.