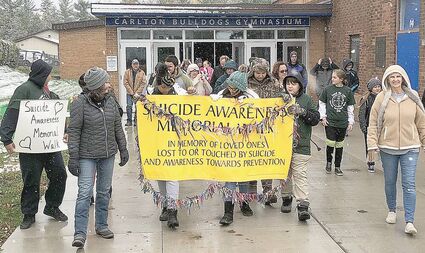 The last in-person suicide awareness walk was on a blustery, snowy day in 2019.

Historically, hundreds of community members gather at the event in memory of loved ones lost to or touched by suicide, and awareness toward prevention. There will be a short walk lasting approximately 20 minutes followed by light refreshments and a short message of hope from Jessica Laney, an investigator with the Carlton County Sheriff's Office who has lost two co-workers to suicide during her career.

Meghann Levitt, public health educator for Carlton County Public Health and Human Services, said Carlton County and many northern Minnesota counties have some of the highest rates of suicide in the state. "This event allows family and friends who have been impacted by suicide to remember those they have lost, as well as connect with others who have had a similar experience," Levitt said. "It is also important for us to provide resources for attendees to pass along to others they know who might be struggling."

The walk will begin and end at Carlton High School. Community resources will also be highlighted, including local mobile crisis services and Essentia's grief support services.

It isn't a fundraiser, and participants may want to wear something with the name/picture of the person they are honoring.

The event is free and registration is not required.

Participants will have the opportunity to tie a ribbon to the banner that will be carried on the walk. Information on suicide awareness and education will be available.

Jo Angell, a mother who lost her son to suicide and who has been involved with the local Carlton County Suicide Prevention Task Force since its beginning, said the walk has been important to her over the years and she is happy it will be held in person again this year after being virtual last year because of the pandemic.

"It has been very helpful to have a special day where people come together, supporting each other and walking in remembrance of our loved ones, publicly stating the seriousness of suicide," Angell said. "We're all there for the same reason."

Everyone is welcome to participate. Past participants include people from the area as well as some from neighboring counties and around the state. They are family members, friends, human service and mental health workers, co-workers, and many others whose lives have been affected by a loved one's suicide or attempt. Masks will be required indoors, regardless of vaccination status, and social distancing will be encouraged both indoors for the speakers, as well as spacing during the walk itself.

The walk is organized by members of the task force, including Levitt and Angell. The task force is made up of community members who meet quarterly to plan further outreach for suicide prevention, awareness, and education in Carlton County.