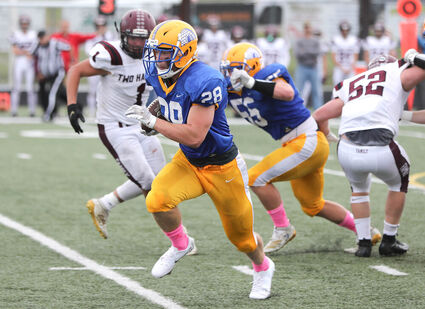 Esko's Nolan Witt carries the ball during a 41-yard touchdown run in Friday's homecoming football game with Two Harbors. Witt finished with 133 yards on the ground.

Undefeated Esko and once-beaten Two Harbors football teams collided on the Esko field for homecoming and the Eskomos proved who is the elite team, taking it to the Agates 24-0. After a scoreless first quarter, the Eskomos offense got rolling, especially on the ground.

"Two Harbors has a nice football team, and they made us work," said Esko coach Scott Arntson. "Our offensive line played well, and that allowed us to run the ball pretty well."

Nolan Witt got the scoring started in the second quarter when he rambled in from 41 yards out.

"Nolan had a big game for us carrying the ball," Arntson said of his junior fullback. "He also had a big game against Denfeld and he's the hammer in our option offense. When he runs like that, and the line blocks like they did, that is a tough thing to stop."

Former Esko head coach Bill Hudspith is an assistant on Arntson's staff. His job is to work with the big boys on the line up front, and his work does not go unnoticed by the head coach.

"Our line is pretty well coached," Arntson said. "Our line makes calls almost at a college level. A lot of them played last year and that is helpful for us. They came into the season right where they left off last year, so it just made things a lot easier for us."

Esko took a 10-0 lead before halftime when Wyatt Stankiewicz booted a 20-yard field goal as the Eskomo defense continued to have an impressive streak of shutout quarters.

"We've had three shutouts in five games and have allowed only a total of 22 points," Arntson said. "Our defensive coordinator, George Perich, does a great job of preparing our guys. We are very athletic and our guys like to fly around and be aggressive." 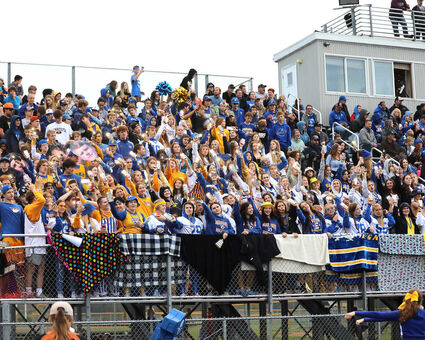 The Esko student section cheers along to the song 'Sweet Caroline' and uses phones to flash lights during Friday's homecoming football win over Two Harbors.

The third quarter was scoreless. Then the Eskomos got another impressive touchdown run of 28 yards from Witt in the fourth quarter. He finished with 133 yards rushing.

Esko ended the scoring on a 24-yard interception return for a touchdown by Koi Perich and an extra point kick by Stankiewicz for the final score of 24-0.

Amazingly, coach Arntson feels that his team is a year ahead of schedule and that even more good things could be on the horizon.

"I'm excited about our athletes, but we have a lot of juniors and sophomores at our skill positions, so if we can stay healthy we could see some good things from this group," Arntson said.

That would be great news for Eskomo fans, but not such good news for other local teams who must face this talented group in the future.